Facebook Twitter LinkedIn Email Print
This was published as a Wall Street Journal’s Think Tank column on May 13, 2016.

The more positive picture came in a New York Times story about federal data showing significant gains for black Americans in infant mortality, suicide rates, teen births, and even deaths from homicide which fell significantly, all driving gains in life expectancy for African Americans. In the story, Harvard sociologist Robert J. Sampson is quoted as saying: “ The decline in violence is a major social fact that is really reshaping society and the lived experience of kids growing up-particularly blacks.” That may seem jarring after Ferguson and Baltimore and the regular reports of violence in Chicago, to name just a few urban areas plagued by crime and tensions between the community and police. 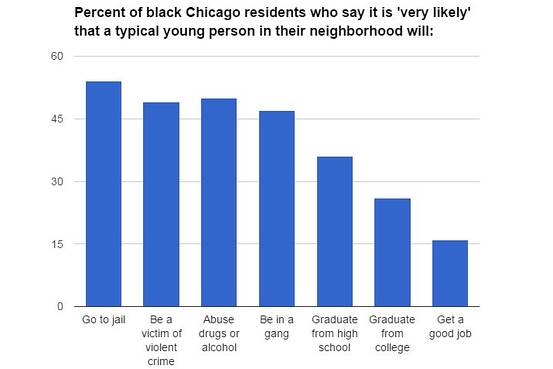 The Kaiser Family Foundation/New York Times survey of Chicago residents shows the other side of the coin. In that survey, as the chart shows, 54% of blacks in Chicago say it is very likely for a young person in their community to end up in jail, 49% to be a victim of a violent crime, and 47% to join a gang. By contrast 36% of blacks say a young person in their neighborhood is very likely to graduate from high school and 26% expect them to graduate from college. Almost half of black residents report knowing a victim of gun violence and 41% of black men said there was a time when they felt their life was in danger. Confidence in the police is so low that 54% of black residents say that if you call the police in a dangerous situation it either won’t make things better or will make them worse.

One picture, the more positive one, is the bird’s eye view of gradual changes over time, and the other is the worm’s eye view of point in time reality today. We see this in other areas as well. The economy has been gradually improving, but people don’t experience it because, until recently, wage growth has been flat. Health spending has been growing at historically moderate rates, but people don’t feel it because what they pay out of pocket for health care is going up.

Similarly, as shown by Sabrina Tavernise’s excellent reporting in the New York Times, there have been gains over time for black Americans on many measures, and gaps have closed between blacks and whites on measures such as homicide rates and life expectancy. Still, reality on the ground is a far different thing. There were fifty one homicides in Chicago in January and two hundred and forty two shootings. Chicago may be an especially troubled city but it is also emblematic of problems in other urban areas. It is more than understandable why African Americans in many urban communities would have a hard time taking the bird’s eye view of statistical progress when the reality they see every day is so different – and troubling –  and why their trust in local institutions and hope for a better future for young people is fraying.