In the race to vaccinate as many people in the U.S. as possible, several benchmarks have been proposed, including President Biden’s goal of reaching 70% of adults in the U.S. with at least one dose by July 4. Whether or not this is attainable is unknown, as the pace of vaccination has slowed, and progress has varied substantially across states. Moreover, even where the 70% target is reached, whether nationally or in a particular state, achievement of the goal for the overall population may mask differences in vaccination rates across groups, particularly by race/ethnicity. To date, vaccination rates among Black and Hispanic people have lagged behind those of White people, largely due to access and logistical barriers as well as concerns about safety and potential side effects. As such, even if broad national vaccination goals are achieved, these groups may remain at higher risk, which could lead to widening health disparities and limit the nation’s recovery from the pandemic.

To further explore potential disparities in meeting vaccination benchmarks, researchers at Stanford University and KFF (Kaiser Family Foundation) used current state-reported vaccination data by race/ethnicity to project vaccine coverage going forward, by state and nationally. Specifically, using the current pace of vaccination, we projected the share of people ages 12 and older who would receive at least one dose of a COVID-19 vaccine as of July 4 for four racial/ethnic groups (White, Black, Hispanic, and Asian) and assessed when 70% of each group would have received at least one dose. We were not able to include other groups in the analysis due to data limitations.

Our focus on vaccinations among those ages 12 and older differs from President Biden’s goal, which is based on those 18 and older. We use a 70% vaccination rate as an illustrative measure for examining potential disparities across groups that may underlie an overall coverage rate.  We focus on those ages 12 and older due to lack of systematic data on vaccinations by race/ethnicity and age. Our projected coverage levels will be lower than those among adults given that younger adolescents have only more recently become eligible for vaccination. Reporting on race and ethnicity is incomplete and inconsistent across states. Previous reporting on racial/ethnic disparities in vaccination through the Centers for Disease Control and Prevention (CDC) and other sources has not adjusted for these data discrepancies, resulting in reported coverage levels that likely underestimate actual population coverage. Although we have adopted a standard set of definitions and rules for reconciling unknown or discrepant data elements to enable transparent and comparable estimation of coverage over time and place, results must be interpreted as approximations in the context of missing and sometimes noisy data. 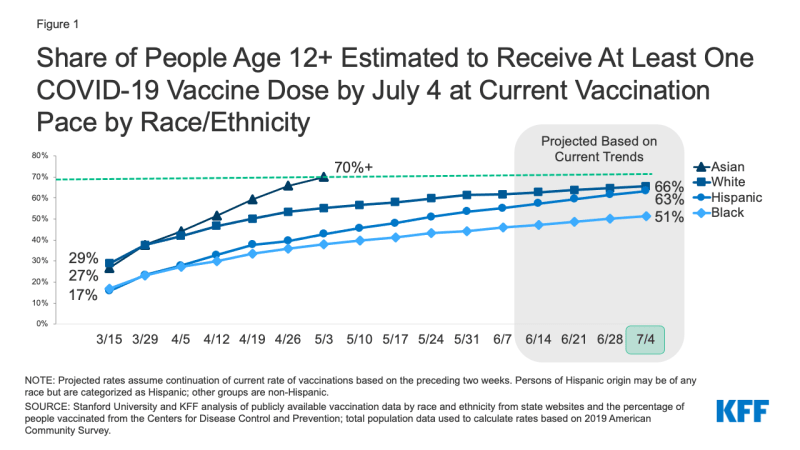 Figure 1: Share of People Age 12+ Estimated to Receive at Least One COVID-19 Vaccine Dose by July 4 at Current Vaccination Pace by Race/Ethnicity

If the pace of new vaccinations continues to slow even further, disparities between groups in achieving progress toward coverage goals would persist. For example, a slowdown of 25% would mean that, overall, the share of those ages 12 and older estimated to have received at least one COVID-19 vaccine dose would drop from 65% to 64%. Asian people would still reach a 70% coverage rate, coverage among White people would remain below this threshold, with 65% receiving at least one dose, and there would be larger gaps for Hispanic and Black people, with 61% and 50% receiving at least one dose by July 4, respectively. These patterns play out at the state level as well.

It remains to be seen whether President Biden’s goal of at least 70% of adults receiving at least one COVID-19 vaccine dose by July 4 will be achieved, particularly given the slowdown in vaccinations. Regardless of when this goal is achieved, it is important to recognize that this national benchmark may mask underlying disparities. This illustrative analysis, which examines potential disparities toward achieving a 70% coverage rate among people ages 12 and older, shows that Black and Hispanic people will likely be left behind even if and when national goals are achieved, with substantial variation across the country. As such, even if the nation, overall, reaches a broad level of protection through vaccination, certain groups and communities will remain at increased risk for COVID-19. These disparities in vaccination may lead to further widening of the disproportionate impacts of COVID-19 on people of color and health disparities more broadly. These findings underscore the importance of continuing to prioritize vaccine equity and focused efforts to deliver vaccinations to underserved people and areas, as well as the importance of maintaining these efforts even after broader national goals are achieved.