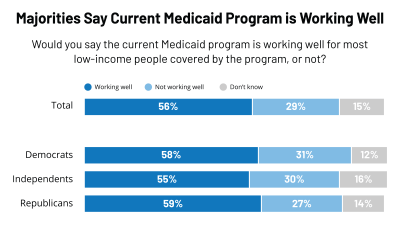 A quick look at the public’s view of Medicaid, the government health insurance and long-term care program for low-income adults and children, from recent KFF polls. #1 Public Holds Favorable Views Of Medicaid A large majority of the public has a favorable view of the Medicaid program. Most recently, the…

These toplines present detailed survey results from an October 2007 survey conducted jointly by NPR, the Kaiser Family Foundation, and the Harvard School of Public Health on the public’s views and opinions of the State Children’s Health Insurance Program and the pending legislation surrounding its reauthorization. Toplines (.pdf)

New Poll Finds Support For Medicaid May Be Linked to Broad Ties To The Program, With Half of Americans Reporting A Personal Connection 1 in 5 Adults Has Received Medicaid Benefits Over Time, And For Most, Experiences Were Positive, Although One Third Of Them Report Having Had Problems Finding A…

This chartpack provides key findings from a May 2007 Kaiser Family Foundation report on a major house-to-house survey on the experiences and challenges facing residents of the New Orleans area. Chartpack (.pdf)

Health and the Economy in the Detroit Area

One year after the federal government intervened to aid the automakers, the Foundation along with The Washington Post and Harvard School of Public Health surveyed the residents of the tri-county Detroit area of Macomb, Oakland, and Wayne Counties to ask about their views and experiences in the midst of the…

The debate over President Clinton’s national health care reform plan put health care policy at the forefront of the national agenda in 1993 and 1994. After the end of that debate, it remained to be seen whether or not health policy would hold the media’s and the public s interest…

National Survey of Physicians 2006: Full Topline Results These toplines provide additional findings from a 2006 national survey of physicians on their views and experiences on a wide range of health care issues. Toplines (.pdf)

NewsHour/Kaiser Survey Underscores Difficulties Faced by Those Without Health Insurance

The National Survey on the Uninsured from The NewsHour with Jim Lehrer and the Kaiser Family Foundation is this year's first nationwide survey on Americans' attitudes about the growing uninsured population and the difficulties uninsured people face getting medical care. The survey also assesses public attitudes on options to address…