National Survey of the Public’s Views About Medicaid – Chartpack

This chartpack provides key findings from the national survey of the public on their views about Medicaid. The survey was conducted in April and May of 2005. The survey includes findings on Americans' personal experience with Medicaid, their knowledge of the program, and their opinion about the program's coverage and…

July’s second Health Tracking Poll reports in further depth on public opinion toward the Affordable Care Act (ACA) in the wake of last month’s key Supreme Court decision. When it comes to the individual mandate, the Court’s verdict that the controversial provision is constitutional as a tax appears to have…

This summary provides an overview of the results of an October 2007 survey conducted jointly by NPR, the Kaiser Family Foundation, and the Harvard School of Public Health on the public’s views and opinions of the State Children’s Health Insurance Program and the pending legislation surrounding its reauthorization. Summary (.pdf)

As part of the Kaiser Family Foundation’s National Survey of Physicians, this portion of the survey examines differences in provider payment rates from different payors, such as Medicaid, Medicare, and private insurers, and explores providers experiences with these different payors and with providing treatment for uninsured and low-income patients. Highlights…

Additional Findings from the National Surveys of Doctors and Pharmacists

Barriers to Medicaid Enrollment for Seniors: Findings from 10 Focus Groups with Low-Income Seniors

Medicaid coverage substantially improves access to health care and lessens the financial burden of medical care for low-income seniors, but the program currently reaches only half of all poor Medicare beneficiaries. This report presents findings of focus groups with low-income seniors in an effort to understand barriers to enrollment for…

A telephone survey of 1,011 adults (between June 20 and July 9, 1996) about how health care reform (specifically Medicare reform, MSAs and the Kassebaum/Kennedy bill) fits into the upcoming November election. The survey was designed by the Kaiser Family Foundation, Harvard University, and Princeton Survey Research Associates (PSRA). The… 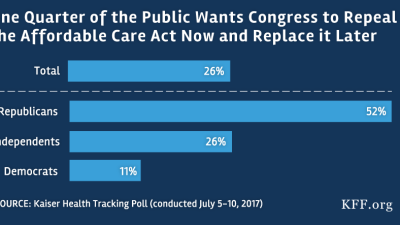