Survey of Americans on HIV/AIDS

This national survey released by the Kaiser Family Foundation finds that Americans increasingly believe the U.S. should be a global leader on HIV/AIDS, including spending more money to fight the epidemic abroad and at home. This comes despite an American characteristic distaste for foreign aid and at a time when…

Kaiser has prepared this survey of more than 7,000 people in G7 nations in advance of the Group of 8 meeting in Gleneagles, Scotland. Public opinion in the countries (Canada, France, Germany, Great Britain, Italy, Japan, and the United States) shows similarities among the nations on whether progress is being…

2012 Survey Of Americans On HIV/AIDS

Leading up to the 2012 International AIDS Conference in Washington, DC, The Washington Post and the Kaiser Family Foundation conducted a joint survey of the American public’s attitudes, awareness, and experiences related to HIV and AIDS. This survey is the 24th in a series of surveys dating back to 1995…

MENLO PARK, CA – A comprehensive new national survey of young adults, ages 18-30, from the Kaiser Family Foundation finds more than three and half decades into the epidemic, HIV remains an issue of deep concern for young people of color, both for themselves as well as for those they know.… 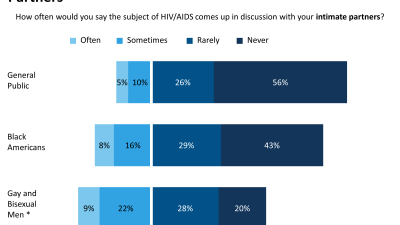 Chartpack: 2006 Survey of Americans on HIV/AIDS

Talking About STDs with Health Professionals Women's Experiences More than 12 million new cases of sexually transmitted diseases (STDs) other than HIV/AIDS, including three million among teenagers alone, occur every year. At current rates, at least one person in four will contract an STD at some point in his or…

Latinos  Views of the HIV/AIDS Epidemic at 20 Years:  Findings from a National Survey

This report, Latinos Views of the HIV/AIDS Epidemic at 20 Years: Findings from a National Survey, examines Latinos views and knowledge of HIV/AIDS, including analysis by race/ethnicity, of trends over time, and among Latino subgroups. The report is based a nationally representative survey of 2,683 adults, ages 18 and older,…