Overall public opinion on the health reform law remains unchanged this month, with 42 percent of Americans holding a favorable view and 43 percent an unfavorable view. Even though previous Health Tracking polls have consistently shown that consumer protections were one of the least controversial and most widely supported provisions…

Confusion Declines, but Remains Widespread in KFF May Tracking Poll

Confusion over the new health reform law declined but remains widespread, with 44 percent of the public saying they were confused in May, compared to 55 percent in April. Moreover, more than a third of Americans (35%) say they do not understand what the impact of the law will be… 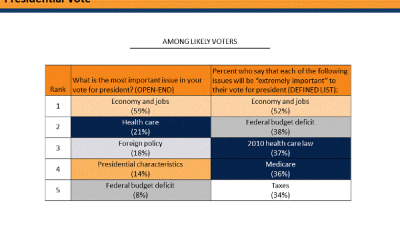 What Issues Are Most Important To Voters in This Election? The Answer Depends On The Question

Election polling has entered hyperdrive, with several polls released daily. As Nov. 6 draws near, it is important to keep in mind that question wording and format do matter, sometimes quite a lot. In our October Kaiser Health Tracking Poll, we measured voters’ top issue priorities two ways: First, we… 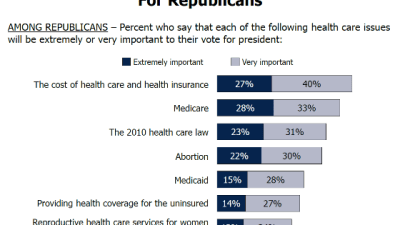 August Kaiser Health Tracking Poll: A Look At The GOP As The Republican Convention Draws Near

Despite the ongoing focus on Republican opposition to the Affordable Care Act (ACA), the latest Kaiser Health Tracking Poll finds that the ACA is not the top health care priority among Republicans. While jobs are still the number one issue, when asked about the health care issues that will impact…

In February, a final rule was issued implementing the Affordable Care Act (ACA) requirement that all health plans provide a uniform summary of coverage for all enrollees and applicants. The idea of providing easy-to-understand summaries of coverage is, in fact, the most popular provision in the ACA, according to a recent Kaiser…

Public Opinion on the ACA: Cruising or Turbulent Ride?

Regular readers of the Kaiser Health Tracking poll know by now that public opinion on the Affordable Care Act (ACA) has been at a steady cruising altitude since it was signed into law on March 23, 2010, with a little over four in ten viewing the law favorably and a…

The Public’s Policy Agenda for the 113th Congress: Briefing and Panel Discussion 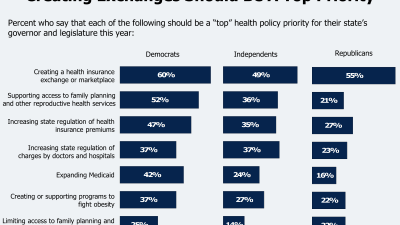