Partisan divides have emerged along many dimensions of the coronavirus pandemic. Republicans are about three times more likely than Democrats to say their state is moving too slowly to reopen business and ease restrictions and Democrats are more likely than Republicans to report taking preventative measures like wearing masks in public. These partisan divides in opinions about the pandemic may be due in part to different partisan attitudes toward the public health response, as well as differences in COVID-19 prevalence between parts of the country. Indeed, as others have shown, the pandemic has hit Democratic counties harder than Republican counties.

This raises the question: How are swing counties affected by the pandemic? In this post, we compare coronavirus cases and death rates across counties in the U.S., based on 2012 and 2016 presidential election voting history, with a particular focus on swing counties. 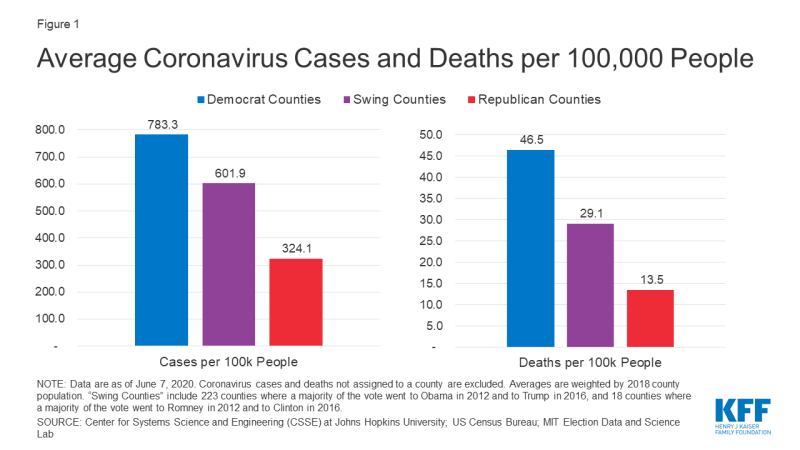 Several factors may contribute to this pattern. First, because the pandemic spread earlier in urban, Democratic areas (particularly New York City) and deaths lag case counts, these counties currently have higher cumulative death counts. Second, most of the counties with the highest case counts are those that have experienced outbreaks in prisons or meat packing plants, which happen to be Republican counties. Additionally, these concentrated outbreaks have led to widespread testing in these areas, which may be capturing less severe cases. Finally, people who have contracted coronavirus in such settings may be younger on average and therefore less likely to die from COVID-19 than affected populations in other parts of the country.

While most swing counties are not in major battleground states, there are a few key swing counties in these states that have been hit particularly hard by COVID-19. For example, Racine and Kenosha counties in the key battleground state of Wisconsin, both of which voted for President Obama in 2012 and for President Trump in 2016, have the highest and fourth-highest number of coronavirus cases per capita of all Wisconsin counties, respectively. Similarly, the swing counties of Northampton and Luzerne counties in Pennsylvania have the fourth- and seventh-highest rates of coronavirus cases in Pennsylvania, respectively.

It’s unclear how much longer swing counties will be stuck in the middle. On one hand, there is concern among some public health experts that large gatherings at protests – the largest of which are happening in major Democratic cities – may lead to another spike in coronavirus cases. On the other hand, social distancing measures have been eased more quickly in more conservative areas, and the current data show that both cases and deaths are growing at a slightly faster rate in Republican counties (including rural areas) than in Democratic and swing counties.