Most Residents See the State’s Economy as Improving, But View Health Care and Housing Costs as Getting Worse

The poll of more than 1800 residents reveals Coloradans’ views on a wide range of issues leading into the 2018 midterm elections and highlights differences related to health and quality of life among key demographic subgroups, including geography, income, race/ethnicity and partisan identification. 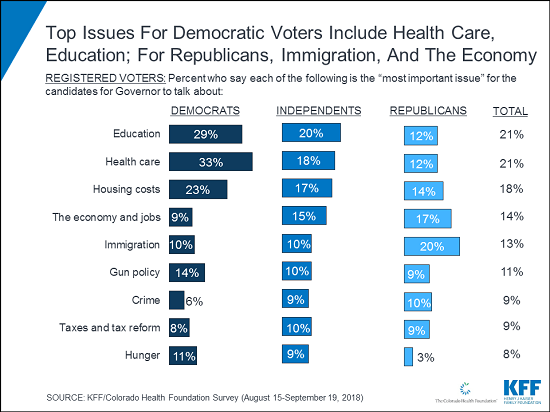 When voters who say health care is an important issue are asked what specifically about health care they would like the candidates to discuss, four in ten Colorado voters (41%) cite health care costs – at least four times as many as name any other health care issue.

“For Colorado voters, affordable housing and education are right up there with health care as top issues in the governor’s race,” KFF President and CEO Drew Altman said. “One lesson is that top issues in state elections often can look quite different than in national polls, though health care emerges among the top tier in both.”

For many Colorado voters, President Trump could play a significant role in the election. More voters say that a candidate’s support for or opposition to President Trump is the biggest factor in their Congressional vote (29%) than say the same about a candidate’s character and experience (23%), local or state issues (24%), or specific national issues (19%).

Overall Coloradans are optimistic about the state’s economy and job market, with six in 10 (59%) saying the economy is getting better in the state. On the other hand, most Coloradans say that housing costs (80%), health care costs (55%), and substance abuse (53%) are getting worse. 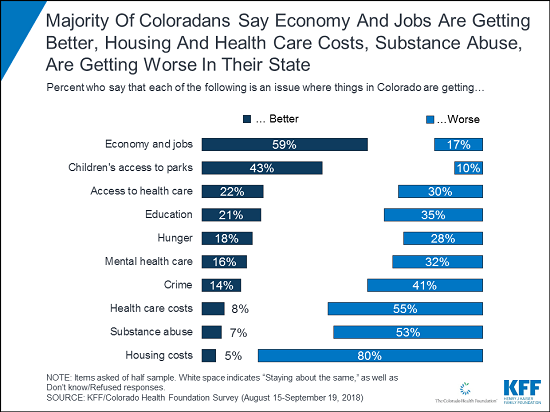 Seven in 10 say the same about making housing more affordable (69%) and funding mental health programs (70%). Fewer, but still a majority, say so about programs to address hunger (62%), substance abuse treatment and prevention (58%) and programs to help children be physically active (52%).

Health care costs rank among the top state government priorities across most demographic groups in Colorado. Notably, however, half (52%) of Black residents and one-third (33%) of those with incomes less than $40,000 name housing costs as their top priority.

Half of Coloradans report that it has become harder for residents to afford their rent or mortgage in recent years (52%). In addition, nearly three in 10 (28%) say they worry that they might lose their home because they can’t afford their monthly payments, including one in eight (12%) who are “very worried.”

These housing worries are worse among residents in the Denver/Boulder area, where two thirds (65%) of residents say it has become more difficult to afford their rent and mortgage costs, and about a third (35%) worry about losing their home because they can’t afford their monthly payments.

Most Coloradans Report Being in Excellent or Very Good Health, But There is Significant Variation by Income

The survey finds most Coloradans say that their health (53%) and mental health (64%) are “excellent” or “very good,” with variations by income and race/ethnicity.

“Not every Coloradan feels they and their family can attain a good quality of life, particularly if they are living on lower incomes or are Black or Hispanic. That’s a sign of inequity that is negatively influencing the health of our state overall,” said Colorado Health Foundation President and CEO Karen McNeil-Miller. “Even with an expanding economy, our state’s work of bringing affordable health care and housing within reach for all Coloradans remains unfinished business. Coloradans want and expect the next elected leaders of Colorado to prioritize addressing these challenges.”

Designed and analyzed by researchers at the Kaiser Family Foundation in consultation with the Colorado Health Foundation, Coloradans’ Perspectives on Health, Quality of Life, and Midterm Elections was conducted by landline and cellular telephone August 15 – September 19, 2018 among a random representative sample of 1,803 adults ages 18 and older living in Colorado. The margin of sampling error including the design effect for the full sample is plus or minus 3 percentage points. For results based on other subgroups, the margin of sampling error may be higher.

Filling the need for trusted information on national health issues, KFF (the Kaiser Family Foundation) is a nonprofit organization based in San Francisco, California.

The Colorado Health Foundation is bringing health in reach for all Coloradans by engaging closely with communities across the state through investing, policy advocacy, learning and capacity building. For more information, please visit www.coloradohealth.org.