As a result of the recently enacted budget deal in Congress, the 2016 Medicare Part B monthly premium will be $121.80, increasing by 16 percent over the 2015 amount—far lower than the increase initially projected by the Medicare actuaries, a new brief from the Kaiser Family Foundation explains. The Part B premium increase will affect 3 in 10 Medicare beneficiaries. The remaining 7 in 10 beneficiaries will pay the same $104.90 monthly premium in 2016 as they paid in 2015, thanks to protections in Social Security law that exempt them from the increase.

The brief describes how the Medicare Part B premium and deductible are affected for 2016 by the Bipartisan Budget Act of 2015, including a new $3 per month fee for some beneficiaries to offset federal spending. It also lays out the connection between the Medicare Part B premium, the Social Security COLA, and the so-called ‘hold-harmless’ provision, and why, without the change in law, Medicare premiums would have increased by 52 percent for the 30 percent of beneficiaries not protected by the hold-harmless provision. 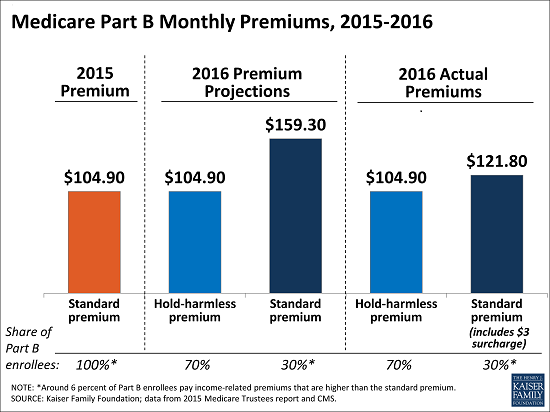 The brief, What’s in Store for Medicare’s Part B Premiums and Deductible in 2016, and Why?, as well as other information and analysis about the Medicare program, is available at kff.org.