Medicare Part D is a voluntary outpatient prescription drug benefit for people with Medicare, provided through private plans approved by the federal government. Beneficiaries can choose to enroll in either a stand-alone prescription drug plan (PDP) to supplement traditional Medicare or a Medicare Advantage prescription drug plan (MA-PD), mainly HMOs and PPOs, that cover all Medicare benefits including drugs. In 2021, 48 million of the more than 62 million people covered by Medicare are enrolled in Part D plans. This fact sheet provides an overview of the Medicare Part D program, plan availability, enrollment, and spending and financing, based on data from the Centers for Medicare & Medicaid Services (CMS), the Congressional Budget Office (CBO), and other sources.

The relatively large decrease in the number of PDPs for 2022 is primarily the result of consolidations of plan offerings sponsored by Cigna (Express Scripts PDPs) and WellCare resulting in the market exit of three national PDPs from each firm in each region. This accounts for just over 200 PDPs offered in 2021 that will no longer be offered in 2022. Enrollees in these non-renewing plans will be automatically switched to other plans offered by the same plan sponsors, although they can choose to switch into a different plan.

Despite the reduction in PDP availability for 2022, beneficiaries in each state will have a choice of multiple stand-alone PDPs, ranging from 19 PDPs in New York to 27 PDPs in Arizona (Figure 2). In addition, beneficiaries will be able to choose from among multiple MA-PDs offered at the local level for coverage of their Medicare benefits.

In 2022, beneficiaries in each state will have the option to enroll in a Part D plan participating in an Innovation Center model in which enhanced drug plans cover insulin products at a monthly copayment of $35 in the deductible, initial coverage, and coverage gap phases of the Part D benefit. Participating plans do not have to cover all insulin products at the $35 monthly copayment amount, just one of each dosage form (vial, pen) and insulin type (rapid-acting, short-acting, intermediate-acting, and long-acting). In 2022, a total of 2,159 Part D plans will participate in this model, a 32% increase in participating plans since 2021. This total includes 33% of all PDPs (258 plans) and 38% of MA-PDs (1,901 plans, including segmented plans) available in 2022, including plans in the territories. Between 7 and 10 PDPs in each region are participating in the model, in addition to multiple MA-PDs (Figure 3).

Beneficiaries with low incomes and modest assets are eligible for assistance with Part D plan premiums and cost sharing. Through the Part D Low-Income Subsidy (LIS) program, additional premium and cost-sharing assistance is available for Part D enrollees with low incomes (less than 150% of poverty, or $19,320 for individuals/$26,130 for married couples in 2021) and modest assets (less than $14,790 for individuals/$29,520 for couples in 2021).

Just over one-fourth of PDPs in 2022 (26%) are benchmark plans. Some enrollees have fewer benchmark plan options than others because benchmark plan availability varies at the Part D region level. The number of premium-free PDPs in 2022 ranges across states from 4 to 9 plans (Figure 5). LIS enrollees can select any plan offered in their area, but if they are enrolled in a non-benchmark plan, they may be required to pay some portion of their plan’s monthly premium.

The Part D defined standard benefit has several phases, including a deductible, an initial coverage phase, a coverage gap phase, and catastrophic coverage, although it does not have a hard cap on out-of-pocket spending. Between 2021 and 2022, the parameters of the standard benefit are rising, which means Part D enrollees will face higher out-of-pocket costs for the deductible and in the initial coverage phase, as they have in prior years, and will have to pay more out-of-pocket before qualifying for catastrophic coverage (Figure 6). 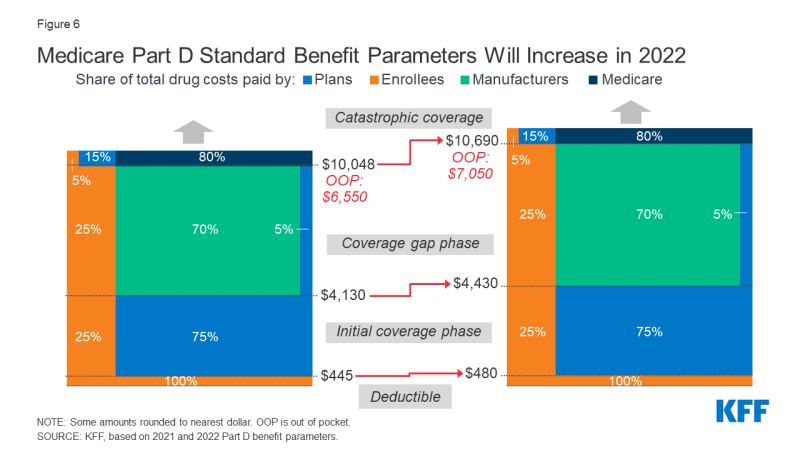 For costs in the coverage gap phase, beneficiaries pay 25% for both brand-name and generic drugs, with manufacturers providing a 70% discount on brands and plans paying the remaining 5% of brand drug costs, and plans paying the remaining 75% of generic drug costs. For total drug costs above the catastrophic threshold, Medicare pays 80%, plans pay 15%, and enrollees pay either 5% of total drug costs or $3.95/$9.85 for each generic and brand-name drug, respectively.

In 2021, 48 million Medicare beneficiaries are enrolled in Medicare Part D plans, including employer-only group plans; of the total, half (50%) are enrolled in stand-alone PDPs and the other half (50%) are enrolled in Medicare Advantage drug plans (Figure 7). Another 1.1 million beneficiaries are estimated to have drug coverage through employer-sponsored retiree plans where the employer receives a subsidy from the federal government equal to 28% of drug expenses between $480 and $9,850 per retiree (in 2022). Several million beneficiaries are estimated to have other sources of drug coverage, including employer plans for active workers, FEHBP, TRICARE, and Veterans Affairs (VA). Another 12% of people with Medicare are estimated to lack creditable drug coverage.

The Congressional Budget Office (CBO) estimates that spending on Part D benefits will total $111 billion in 2022, representing 15% of net Medicare outlays (net of offsetting receipts from premiums and state transfers). Part D spending depends on several factors, including the total number of Part D enrollees, their health status and drug use, the number of high-cost enrollees (those with drug spending above the catastrophic threshold), the number of enrollees receiving the Low-Income Subsidy, and plans’ ability to negotiate discounts (rebates) with drug companies and preferred pricing arrangements with pharmacies, and manage use (e.g., promoting use of generic drugs, prior authorization, step therapy, quantity limits, and mail order). Federal law currently prohibits the Secretary of Health and Human Services from interfering in drug price negotiations between Part D plan sponsors and drug manufacturers.

Financing for Part D comes from general revenues (73%), beneficiary premiums (15%), and state contributions (11%). The monthly premium paid by enrollees is set to cover 25.5% of the cost of standard drug coverage. Medicare subsidizes the remaining 74.5%, based on bids submitted by plans for their expected benefit payments. Higher-income Part D enrollees pay a larger share of standard Part D costs, ranging from 35% to 85%, depending on income.

For 2022, Medicare’s actuaries estimate that Part D plans will receive direct subsidy payments averaging $149 per enrollee overall, $2,768 for enrollees receiving the LIS, and $1,067 in reinsurance payments for very high-cost enrollees; employers are expected to receive, on average, $533 for retirees in employer-subsidy plans. Part D plans also receive additional risk-adjusted payments based on the health status of their enrollees, and plans’ potential total losses or gains are limited by risk-sharing arrangements with the federal government (“risk corridors”).

The Medicare drug benefit has helped to reduce out-of-pocket drug spending for enrollees, which is especially important to those with modest incomes or very high drug costs. But in the face of rising drug prices, more plans charging coinsurance rather than flat copayments for covered brand-name drugs, and annual increases in the out-of-pocket spending threshold, many Part D enrollees are likely to face higher out-of-pocket costs for their medications.

Policymakers are currently debating several proposals to control drug spending by Medicare and beneficiaries. Several of these proposals address concerns about the lack of a hard cap on out-of-pocket spending for Part D enrollees, the significant increase in Medicare spending for enrollees with high drug costs, prices for many drugs rising faster than the rate of inflation, and the relatively weak financial incentives faced by Part D plan sponsors to control high drug costs. Such proposals include allowing Medicare to negotiate the price of drugs, restructuring the Part D benefit to add a hard cap on out-of-pocket drug spending, requiring manufacturers to pay a rebate to the federal government if their drug prices increase faster than inflation, and shifting more of the responsibility for catastrophic coverage costs to Part D plans and drug manufacturers.

Understanding how well Part D continues to meet the needs of people on Medicare will be informed by ongoing analysis of the Part D plan marketplace, formulary coverage and costs for new and existing medications, and trends in Medicare beneficiaries’ out-of-pocket drug spending.