DALLAS, TX – Greater Than AIDS — a leading national public information response to the U.S. domestic HIV/AIDS epidemic – today launched Speak Out Texas, a new campaign developed with local health departments to engage the lesbian, gay, bisexual and transgender (LGBT) community in response to the silence and stigma of HIV. The cross-platform campaign, which features gay men from Texas, encourages more open communication about HIV in relationships, with healthcare providers and within the community.

Speak Out Texas comes at a critical time when new HIV infections are rising among gay men in the state, mirroring national trends. Although gay men are not the only population affected by HIV, they have been from the beginning of the epidemic and continue today to be among those hit hardest. Then, as now, gay men represented the largest share of people affected by HIV/AIDS. In Texas, gay men represent nearly 70 percent of new HIV diagnoses occurring each year in the state.

“Breaking the silence about HIV is a critical part of prevention,” said Tina Hoff, Senior Vice President and Director, Health Communication and Media Partnerships, Kaiser Family Foundation, a founding partner Greater Than AIDS. “Speak Out is about supporting people to talk openly about HIV in all aspects of life.” 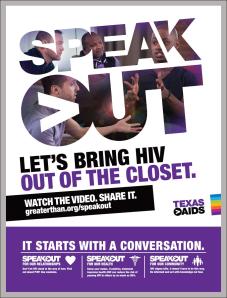 The centerpiece of the campaign is a series of videos produced from group and individual conversations with gay men currently residing in Dallas (some HIV positive, some not). In these intimate and candid videos, the men talk about how HIV has affected their lives and inspire others to take action by speaking out. Campaign content is being distributed on the web and through social media as well as through targeted community outreach.

Targeted messages will also be placed through gay-related websites and mobile digital banners, as well as posters in LGBT venues.  Health departments and local AIDS services organizations are also engaging communities in Dallas, Austin and other cities with interactive booths and informational materials at Pride festivals and other events.

“Stigma continues to fuel the HIV epidemic and is especially apparent here in Texas,” said Dr. John Carlo, CEO, AIDS Arms, Inc., which is a non-profit agency providing prevention and health care services for those in the Dallas area. “Added to this, an overall waning in public awareness and complacency are combining to further cause alarming rates of new infections, particularly in younger gay men. Speak Out hopefully will start more open conversations about HIV, so that we can come closer to achieving an AIDS free generation.”

Speak Out Texas is directed at the broader LGBT community including those who are living with HIV and those who are not. “I am my brother’s keeper, positive or not,” says Jai Makokha, an HIV/AIDS educator from Dallas who appears in Speak Out Texas. “When those of us who are HIV-negative speak out about the stigma associated with HIV, we can really make a change.”

In addition to Jai, others featured in the campaign are: Angel, newly diagnosed, who speaks about the importance of the support of family and friends, but still struggles with the stigma and isolation; Nat, who speaks openly about his battle with methamphetamine addiction and then subsequent HIV infection; and six others who open up about how HIV has touched their lives: Alex; Daniel; David; Melvin; Mikey; and Ocie.

There are more tools available today to prevent and treat HIV than ever before. Early diagnosis and treatment are critical to improving health, extending life, and helping to prevent the spread of the disease. People with HIV who take their medications regularly can reduce the chance of transmitting the virus by as much as 96 percent.

Among the messages within the campaign are informational resources about PrEP – pre-exposure prophylaxis — a new one pill, once-daily prescription pill to reduce risk of infection, as well as other prevention options. Given the overwhelming effectiveness of PrEP, the U.S. Centers for Disease Control and Prevention (CDC) recently issued new clinical guidelines encouraging its use for those at significant risk for HIV.

The Speak Out Texas campaign was produced by the Kaiser Family Foundation. The Elton John AIDS Foundation, among others, provide financial support for Speak Out.

For more information about Greater Than AIDS and the new Speak Out Texas campaign, visit:  www.greaterthan.org/speak-out.

Greater Than AIDS is a leading national public information response focused on the U.S. domestic epidemic. Launched in 2009, it is supported by a broad coalition of public and private sector partners, including: major media and other business leaders; Federal, state and local health agencies and departments; national leadership groups; AIDS service and other community organizations; and foundations, among others. Through targeted media messages and community outreach, Greater Than AIDS works to increase knowledge, reduce stigma and promote actions to stem the spread of the disease. While national in scope, Greater Than AIDS focuses on communities most affected.

The Kaiser Family Foundation provides strategic direction and day-to-day management, as well as oversees the production of the campaigns. The Black AIDS Institute – a think tank exclusively focused on AIDS in Black America – provides leadership and expert guidance and supports community engagement. Additional financial and substantive support is provided by the Elton John AIDS Foundation and Ford Foundation, among others.