Analysis of 15 States and D.C. Also Finds Changes Vary Across States and Insurers

MENLO PARK, Calif. — An early look at the cost of health insurance in 16 major cities finds that average premiums for the benchmark silver plan – the one upon which federal financial help under the Affordable Care Act to consumers is based – will decrease slightly in 2015.  The new study from the Kaiser Family Foundation analyzes premiums in the largest cities in 15 states and the District of Columbia where information from rate filings is available.

Premiums for the second-lowest cost silver plan for individuals will fall by an average of 0.8 percent from current levels in these cities when open enrollment begins on Nov. 15, according to the study. The analysis finds that the premium for the second-lowest-cost silver plan is decreasing in 7 of the 16 areas studied – but also that changes in average premiums will vary considerably across areas. They range from a decline of 15.6 percent in Denver, Colorado (to $211 per month), to an increase of 8.7 percent in Nashville, Tennessee (to $205 per month). In both cases premiums are for a 40-year-old nonsmoker, before taking into account any tax credit.  It is important to note that rate changes may be different in different rating areas in these states. 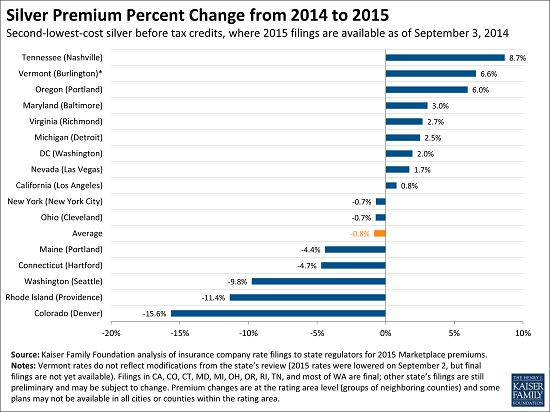 At least two insurers will offer coverage through the marketplaces in the major city in each of the 15 states studied and D.C. Most areas will have five or more insurers, and three will have 10 or more. The study finds that insurer participation generally held stable or increased in all of the cities, with the exception of Portland, Oregon, where the number of participating insurers decreased from 10 to 8.

Modest changes in premiums would be a boon for the federal budget, but for consumers the picture is more complex

The second-lowest-cost silver plan in each state is closely watched because it is the benchmark that helps determine how much assistance eligible individuals (those with incomes from 100 percent to 400 percent of the poverty level) can receive in the form of federal tax credits to help them buy coverage.

For Marketplace consumers, however, the implications are more complicated. On the one hand, the availability of tax credits can cushion eligible individuals from having to pay more even in areas where premiums will rise. The analysis finds, for example, that in nearly all of the 16 areas studied, a single 40-year-old with income of $30,000 a year would pay 0.8 percent less in premiums in 2015 than in 2014 to enroll in the second-lowest-cost silver plan, after taking tax credits into account.

On the other hand, even people who receive federal financial help may face large premium increases if they simply re-enroll in the same plan in 2015, since in many cases the lower-cost plans in 2015 will no longer be among the low-cost offerings next year. This is because people receiving tax credits must pay the full difference in premium between the plan they choose and the second-lowest-cost silver plan in their area. In 12 of the 16 cities, at least one of the insurers that had offered one of the two lowest-cost silver plans in 2014 is no longer offering a low-cost silver plan in 2015.

“Consumers should go into the open enrollment period prepared to shop for the best deal all over again,” said Kaiser Senior Vice President Larry Levitt, co-executive director of the Foundation’s Program for the Study of Health Reform and Private Insurance. “You could end up paying more if your insurer is no longer offering one of the low-cost plans, so you should look carefully at your options.”

For bronze-level plans, which cover about 60 percent of enrollees’ health expenses on average, the analysis finds that the premium for the lowest-cost bronze option across the marketplaces is increasing an average of 3.3 percent in 2015. Here again changes vary across areas, from a decline of 15.7 percent in the premium (to $196 per month) for the lowest-cost bronze plan available in Hartford, Conn., to a premium increase of 13.3 percent (to $165 per month) for such a plan in Baltimore. Bronze plans are the least expensive option someone can choose to satisfy the ACA’s requirement to have coverage.

The analysis provides state-by-state estimates of premiums and premium changes for the lower-cost bronze plan and the two lowest-cost silver plans available through ACA marketplaces in Los Angeles, Denver, Hartford, Conn., Washington, D.C., Portland, Maine, Baltimore, Detroit, Las Vegas, Nev., New York City, Cleveland, Portland, Ore., Providence, R.I., Nashville, Burlington, Vt., Richmond, Va., and Seattle.  The report shows lower-cost plan premiums in 2015 and 2014, before and after federal tax credits, for a 40-year-old single adult who is a nonsmoker and earns $30,000 a year. It also compares 2015 and 2014 marketplace premiums for such plans, after factoring in tax credits, for a 25-year-old individual, a family of four with two 40-year-old adults and two kids, and a retired couple of 60-year-olds.

The analysis is based on 16 markets where states have publicly released comprehensive data on rates or rate filings for all insurers. The overall picture could change as more premium data becomes available. The full report, Analysis of 2015 Premium Changes in the Affordable Care Act’s Health Insurance Marketplaces, is available online.