More than four years after the Affordable Care Act’s enactment and more than a month after the close of open enrollment, six in 10 Americans (60%) say the health reform law has not had an impact on them or their families, Kaiser’s May Tracking Poll finds. 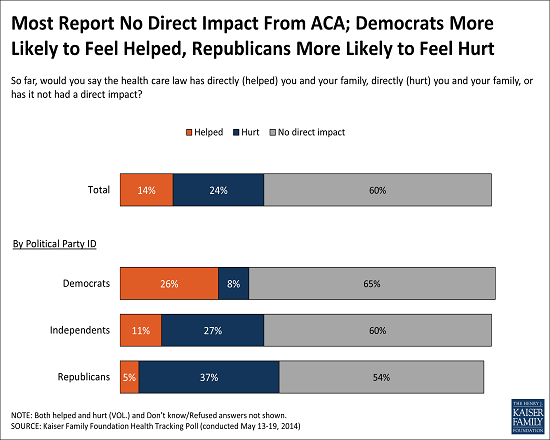 This month’s poll also takes an early look at registered voters’ views in advance of November’s congressional midterm elections. (As the election nears, our polling will look more closely at likely voters.)

The poll finds more registered voters (51%) say they are tired of hearing candidates talk about the health care law and want them to focus more on other issues like jobs than say it is important for candidates to continue to debate the health reform law (43%).  These averages mask a familiar partisan divide on the ACA, with a majority of Democratic voters (69%) saying they are tired of the debate and a majority of Republican voters (60%) saying they want it to continue. Independents are more split, with half (50%) saying they’d rather hear candidates talk about issues like jobs and 44 percent saying they want the ACA debate to continue.

Overall a majority of registered voters say they will consider a candidate’s position on the health care law as just one of many important factors to their vote.  About three in 10 voters (31%) say they would only vote for a candidate who shares their view on the health reform law.  This includes a somewhat larger share of those with an unfavorable view of the law (38%) than a favorable one (28%), suggesting the law may be more of a motivator for opponents than supporters. The share of voters who say they would only vote for a like-minded candidate on the health care law is similar to the share who say the same about government spending (33%), while slightly fewer say the same about job creation and immigration reform (22% each).

The survey was designed and analyzed by public opinion researchers at the Kaiser Family Foundation and was conducted from May 13-19 among a nationally representative random digit dial telephone sample of 1,505 adults ages 18 and older (including 1,279 registered voters). Telephone interviews were conducted by landline (750) and cell phone (755) and were carried out in English and Spanish. The margin of sampling error is plus or minus 3 percentage points for the full sample and 3 percentage points for registered voters. For results based on subgroups, the margin of sampling error may be higher.