Most Republicans Continue to View Replacement Plan Favorably, But Their Support Has Slipped

Three-Quarters of the Public, Including Most Republicans, View Medicaid Favorably; Most Oppose Federal Funding Cuts to States

As the Senate prepares to vote on the Republican bill to repeal and replace the Affordable Care Act and cap federal Medicaid funding, a new Kaiser Family Foundation Tracking Poll finds most Americans oppose the Republican plan and many of its key provisions. A majority of Republicans, however, continue to support the Republican plan, though by a significantly narrower margin than last month.

Most (55%) of the public holds an unfavorable view of the Republican plan, while 30 percent hold a favorable one. There is also a large intensity gap, with far more saying they have “very unfavorable” views (38%) than “very favorable” ones (11%).

While a large majority of Democrats (85%) and most independents (52%) hold unfavorable views of the plan, most Republicans (56%) and supporters of President Trump (55%) continue to hold favorable views – though support among these groups has fallen significantly since May, when two-thirds of Republicans (67%) and seven in 10 Trump supporters (69%) viewed it favorably. 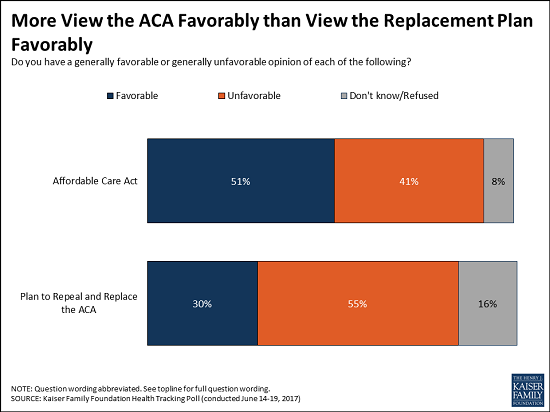 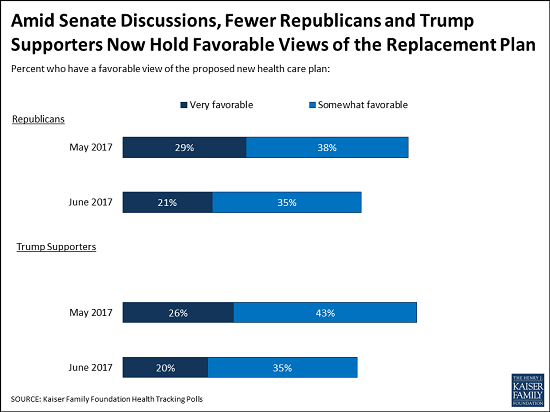 “The public at large is deeply skeptical about the repeal-and-replace plan, with support among the Republican base hanging in but slipping and in danger of falling further,” says Drew Altman, president and CEO of the Kaiser Family Foundation.

On Medicaid, the federal and state program that provides health insurance and long-term care to low-income Americans, three-quarters (74%) of the public – including most (61%) Republicans – have a favorable view. Most, including majorities across parties, also say the program is working well for most low-income people nationally (61%) and in their state (67%).

Just over a third of the public supports two key elements of the Republican plan that would limit federal funding to states: reducing federal funding for the ACA’s Medicaid expansion (36% support this) and changing federal Medicaid funding to limit how much money states receive (35% support). Limiting federal Medicaid funding for long-term care for seniors and people with disabilities draws less support (21%). In contrast, majorities of the public support attaching conditions to Medicaid coverage – allowing states to condition Medicaid eligibility on work requirements for non-disabled adults (70% support) and drug testing (64% support).

Republicans are more likely to support most of these potential Medicaid changes than are Democrats or independents.

The poll also finds the public prefers the status quo to the Republican plan in other ways, in some cases with majority support across party lines:

If the current repeal and replace plan fails to pass Congress, nearly equal shares of the public say they want President Trump and Congress to keep working on the issue (49%) as say they want them to stop working on health care and move on to other priorities (45%). Partisans split on this question, with most Republicans (80%) wanting work on repeal to continue, most Democrats (67%) wanting to move on to other issues, and independents divided (49% want work to continue, 45% want to move on).

Designed and analyzed by public opinion researchers at the Kaiser Family Foundation, the poll was conducted from June 14 – 19 among a nationally representative random digit dial telephone sample of 1,208 adults. Interviews were conducted in English and Spanish by landline (427) and cell phone (781). The margin of sampling error is plus or minus 3 percentage points for the full sample. For results based on subgroups, the margin of sampling error may be higher.