Amid Primary Debate about Universal Coverage, Most Democrats Now Want to Expand the Affordable Care Act, Leading to Somewhat Less Favorable Views of the Law Itself

With the Democratic presidential primary featuring a debate about how to get to universal health coverage in the United States, the latest Kaiser Health Tracking Poll finds most Democrats want Congress to expand the Affordable Care Act, contributing to a widening gap between unfavorable and favorable views of the health reform law.

While most Republicans (56%) say they want Congress to repeal the law entirely, most Democrats (51%) say they want to expand what the law does – a share that has increased 13 percentage points over the past year. Even among Democrats who do not hold a favorable view of the ACA, twice as many want Congress to expand the law (40%) than repeal it (19%), suggesting this goal is contributing to the somewhat less favorable views Democrats now hold about the law. 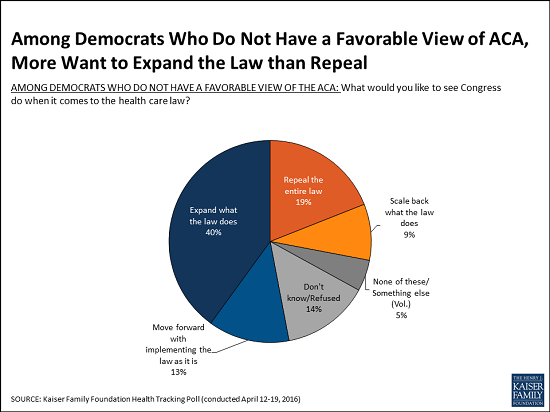 As the 2016 presidential election contest marches on, voters rank health care fourth as the issue they most want the candidates to discuss on the trail. When asked to name the issues they are most interested in hearing the candidates discuss, by far the largest share cite the economy/jobs (30%), followed by national security (21%), immigration (17%), and health care (15%). Further down the list are social issues (10%), education (8%), and foreign policy (8%).

When asked specifically what health care issues voters would most like to hear the presidential candidates discuss, the Affordable Care Act (37%) and health care costs (36%) top the list, followed by expanding coverage for the uninsured (26%) and Medicare (10%).