As the problem of prescription painkiller abuse has captured greater attention from policymakers and the media, the November Kaiser Health Tracking Poll explores the public’s connection to and knowledge of the issue, as well as their views of how to address it. A surprising 56 percent of the public say they have some personal connection to the issue – either because they say they know someone who has taken a prescription painkiller that wasn’t prescribed to them, know someone who has been addicted, or know someone who has died from a prescription painkiller overdose. More of the public says it’s easy for people to get access to painkillers not prescribed to them than say it is easy for people who medically need them to access them (77 percent vs.58 percent). Combatting the problem of opioid abuse ranks among several other priorities the public has for their state officials, with 50 percent saying it should be a top priority, lower than the shares who say other issues such as improving public education (76 percent) or attracting and retaining business and jobs (64 percent) are top priorities, but similar to the shares who place a top priority on reforming the criminal justice system (50 percent) and improving infrastructure (46 percent). The public is largely supportive  of ‘Good Samaritan’ laws that some states have adopted that allow people to call for emergency medical help for a drug overdose for themselves or others without fear of being prosecuted (63 percent). However, when it comes to views on access to Naloxone, a medication that can reverse the effects of a drug overdose, most of the public believes that access should be restricted to those with a prescription (62 percent). Large majorities say a number of efforts would be effective in reducing painkiller abuse, including treatment programs (85 percent), monitoring doctors’ prescribing habits (82 percent), public education programs (80 percent), training doctors (79 percent), and encouraging people to appropriately dispose of leftover medication (69 percent).

While views of the health care law have been narrowly divided for much of the year, this month more say they have an unfavorable view of the law than a favorable one (45 percent versus 38 percent, a statistically significant difference). About a third of the public (35 percent), including 40 percent of the uninsured, says they are closely following news coverage of the ACA’s third open enrollment period. The uninsured report valuing insurance, with large majorities saying it is personally important to have (86 percent) and that it is something they need (69 percent), and just over half (55 percent) intend on getting coverage in the next few months. When asked to say in their own words why they are uninsured, the most common response is that insurance is too expensive and they can’t afford it (33 percent).

The abuse of prescription painkillers is receiving more attention and President Obama recently addressed the issue, calling for more federal action to prevent and treat addiction. This month’s Kaiser Health Tracking Poll takes a look at the issue, examining the public’s personal connection to and knowledge of the issue as well as their views of what approaches may be effective in reducing the abuse of prescription painkillers.

Widespread Personal Connections to the Issue 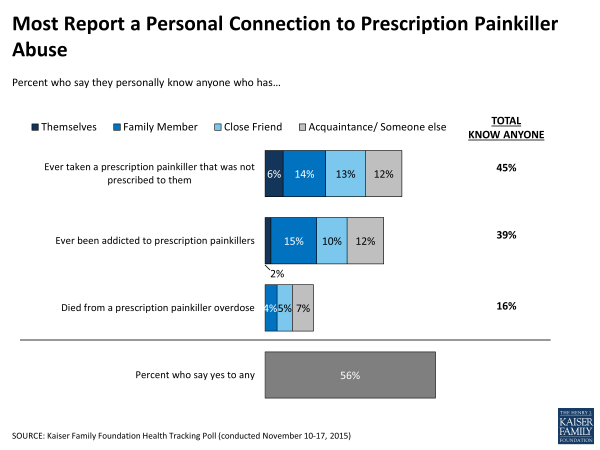 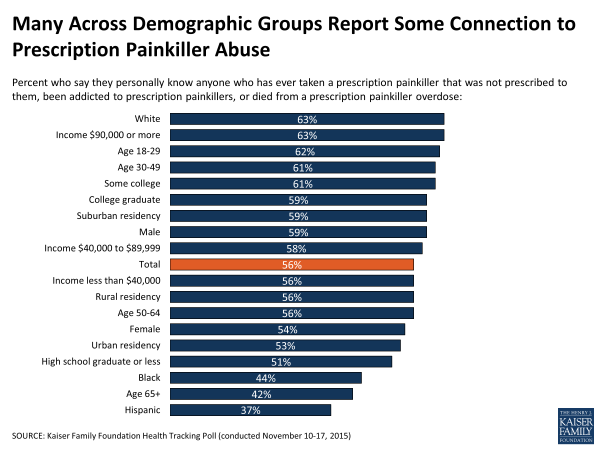 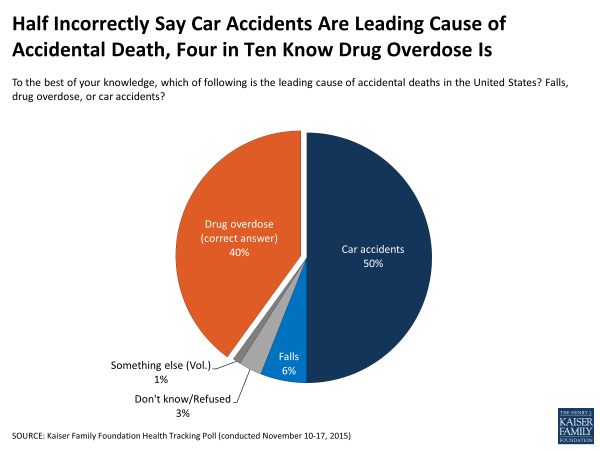 In the debate about how to rein in the abuse of prescription drugs, policymakers and medical professionals are faced with finding an appropriate balance so that access to these drugs is restricted for those who are abusing them, while at the same time, maintaining access for those who medically need them. The perception among the public is that the balance is currently in the abuser’s favor. More of the public says it’s easy for people to get access to painkillers not prescribed to them than say it is easy for people who medically need them to access them (77 percent vs.58 percent). In fact, about 4 in 10 (39 percent) say they think it is difficult for those who medically need prescription painkillers to access them. 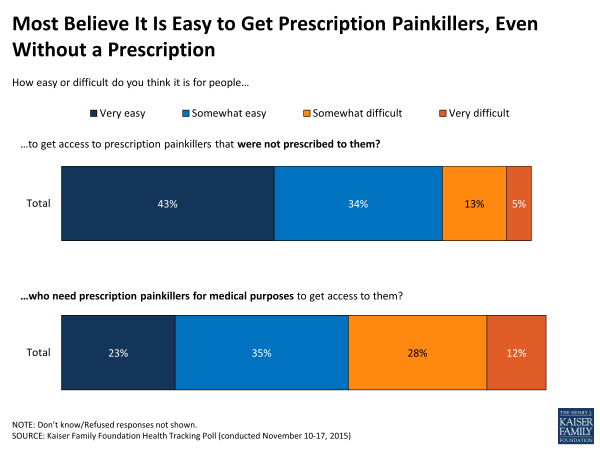 Views and Knowledge of Prescription Painkillers Compared to Heroin 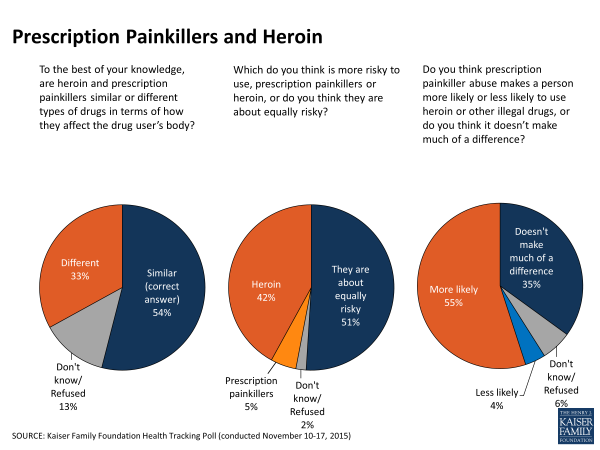 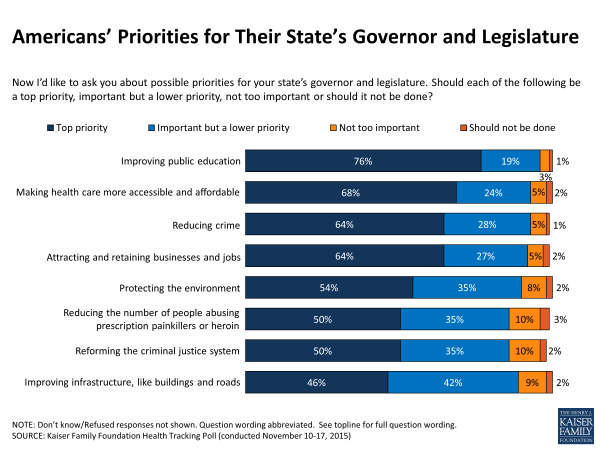 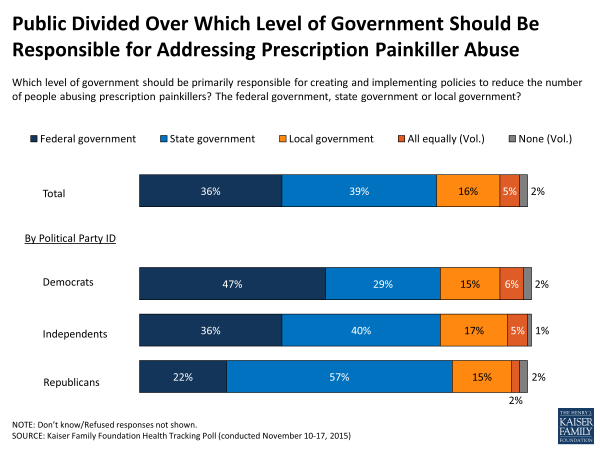 Some states have passed laws specifically aimed at lowering the number of deaths from opioid overdoses.3 One such law is related to a drug called Narcan or Naloxone that can prevent people from dying if they are experiencing an overdose of a prescription painkiller or heroin. Some states have passed laws to make this drug available to adults without a prescription while other states restrict the sale of the drug due to concerns it might encourage the use of illegal drugs. When asked their views on these laws, most of the public (62 percent) say access to the drug should only be allowed with a prescription, nearly twice the share who say it should be available without a prescription (33 percent). Republicans (74 percent) are more likely than Democrats and independents to say access to the drug should be restricted, but still majorities of Democrats (54 percent) and independents (61 percent) agree. Those who know someone who has abused prescription painkillers or died from an overdose are more likely than those who don’t to say people should be able to get the drug without a prescription (41 percent vs. 23 percent). 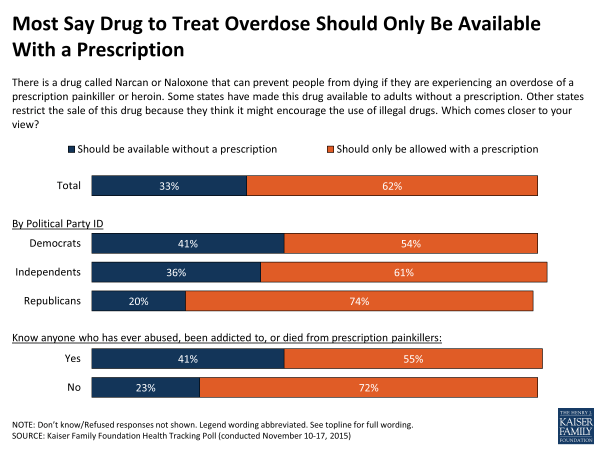 Another approach some states have taken to reduce opioid deaths is enacting ‘Good Samaritan’ laws, whereby people who call for emergency medical help for a drug overdose for themselves or others are not arrested for having or using the illicit drug. However, some criticize this approach saying it is too lenient on drug users. Most of the public (63 percent), including majorities across party lines, say these types of laws are a good idea, while 3 in 10 (30 percent) say they are a bad idea. Those who say they have a personal connection to the issue are more likely than others to say ‘Good Samaritan’ laws are a good idea (67 percent vs. 58 percent). 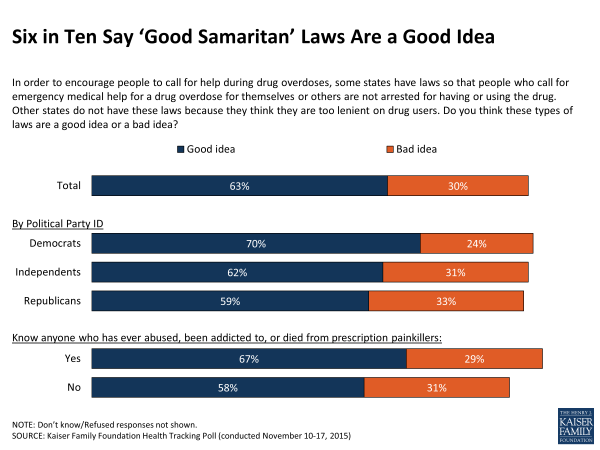 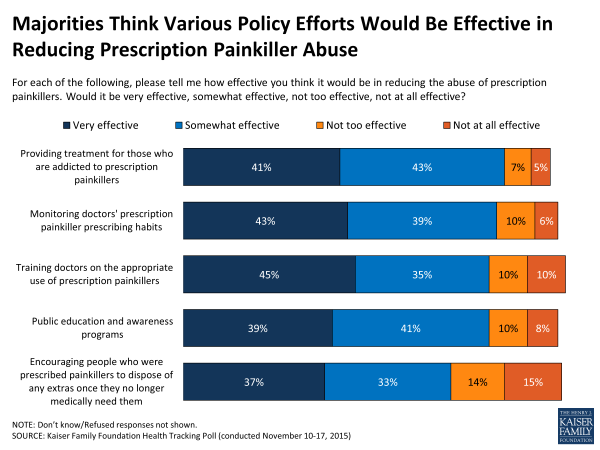 Views of the ACA

While views of the health care law have been narrowly divided for much of the year, this month, more say they have an unfavorable view of the law than a favorable one (45 percent versus 38 percent, a statistically significant difference). As has been true since the law passed, there is a stark partisan divide on views of the law. A majority of Democrats (63 percent) report a favorable opinion and a majority of Republicans (75 percent) report an unfavorable one. Independents fall in the middle with 36 percent feeling favorable and 44 percent feeling unfavorable. 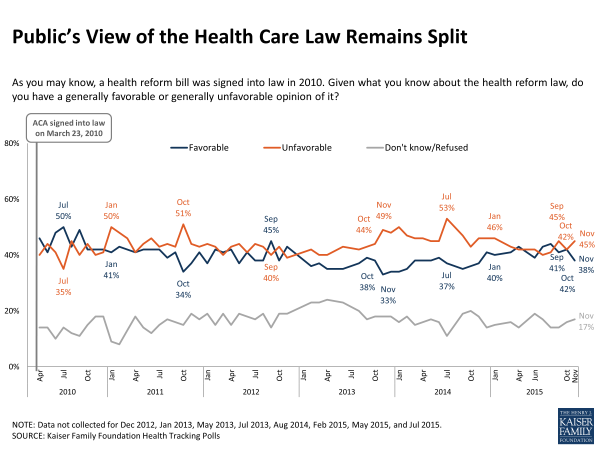 In line with findings from previous Kaiser Health Tracking Polls, the public doesn’t agree on what Congress should do when it comes to the health care law. Three in 10 (30 percent) say they would like Congress to repeal the entire law and 12 percent want Congress to scale back what the law does, while 16 percent think it is best to move forward with implementing the law as is and 26 percent say they would like to see Congress expand what the law does. Similar to overall opinion of the law, opinions about the future of the law vary starkly by political party identification. 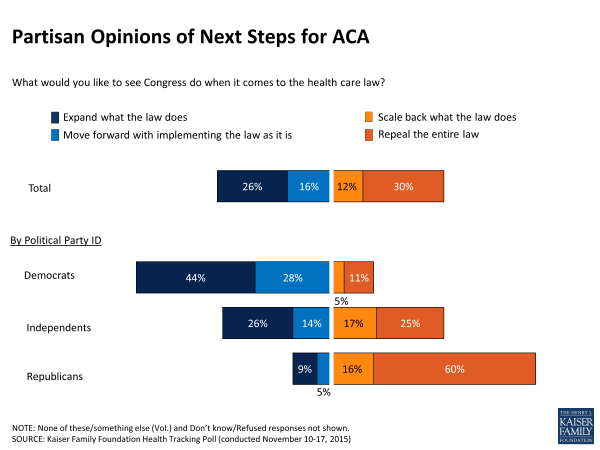 Health policy news took a back seat to other national and international news stories this month, as the public’s attention was focused on news coverage of the 2016 presidential campaigns and international conflicts involving ISIS and other Islamic militant groups in Iraq and Syria (about three-quarters say they followed each story ‘very’ or ‘fairly’ closely). This survey was in the field during the attacks on Paris, and those who took the survey on or after the day of the attacks are slightly more likely to say they followed news about ISIS (77 percent), but still 69 percent of those who took the survey before the attacks say they followed this news. Roughly half of the public reports closely following the crash of a Russian Metrojet airplane in Egypt (55 percent) and the controversy about government funding for Planned Parenthood (56 percent), along with other national stories such as discussions in Washington about the federal budget (50 percent) and news that Paul Ryan was appointed as the new Speaker of the House of Representatives (45 percent). Fewer than 4 in 10 say they closely followed damage in Mexico caused by Hurricane Patricia (37 percent) and the health policy stories about the release of 2016 health insurance premium rates (36 percent) and the health care law’s third open enrollment period (35 percent). 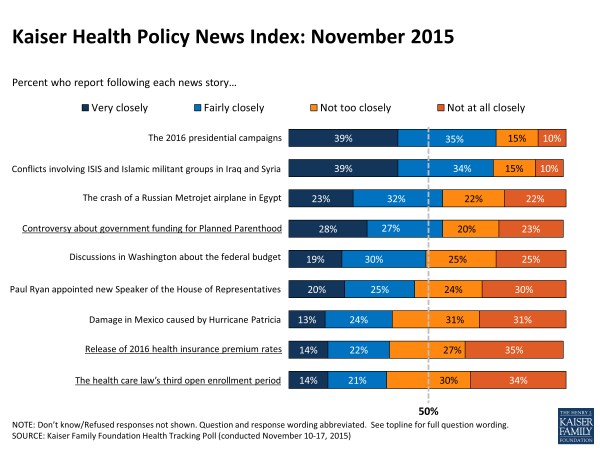 The ACA’s Third Open Enrollment Period and the Uninsured 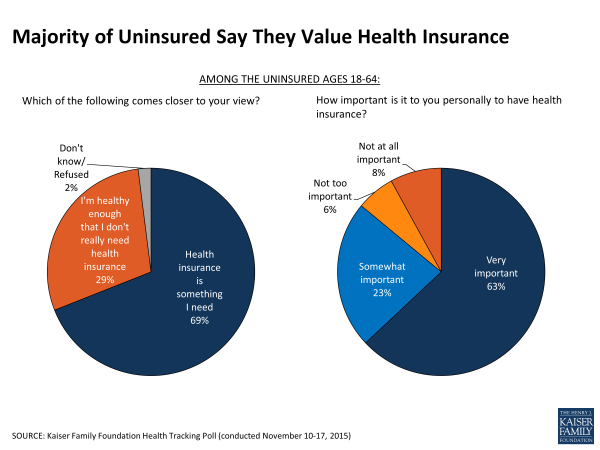 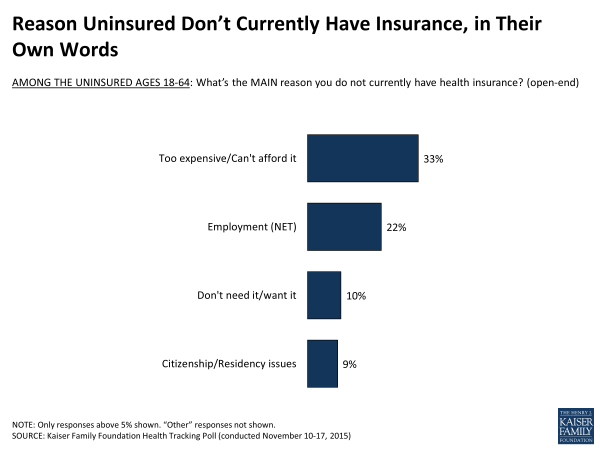