The Kaiser Health Policy News Index is designed to help journalists and policymakers understand which health policy-related news stories Americans are paying attention to, and what the public understands about health policy issues covered in the news. This month’s Index finds that all health policy news stories ranked far behind two other stories that captured public attention this month: the search for the missing Malaysia Airlines flight and the conflict between Ukraine and Russia. Among health policy news, the most closely followed story was coverage of how many people have enrolled in health insurance options under the Affordable Care Act (ACA).

As the open enrollment period for new coverage options under the ACA comes to an end, the most-closely followed health policy news story this month was coverage of how many people have enrolled in these new options, with about half (48 percent) saying they followed this story “very closely” or “fairly closely.” Attention to this story trailed far behind the top two non-health news stories this month: the Malaysia Airlines flight that went missing over Southeast Asia (77 percent) and the conflict between Ukraine and Russia (68 percent), and just behind discussions in Washington about the federal budget and the veto of a bill in Arizona that would have given business owners the right to refuse service to gay people (51 percent each). Somewhat smaller shares report closely following other health-related news stories, including an upcoming change to food nutrition labels (46 percent), the announcement that some people who had their health plans canceled because of the ACA will be allowed to keep those plans for 2 more years (43 percent), a report finding a decline in the obesity rate for young children (40 percent), and news about a baby born with HIV who is apparently free of the virus after 9 months (33 percent). The least-closely followed health policy story asked about this month was news of the state of Arkansas’ alternative to Medicaid expansion, with only about one in ten (11 percent) saying they followed it “very closely” or “fairly closely.” Arkansas’ alternative to Medicaid expansion received national attention because it was the first state to win federal approval for a “private option”, which uses federal Medicaid money to help low-income people purchase private insurance, and because there was a contentious debate this month over continued funding. 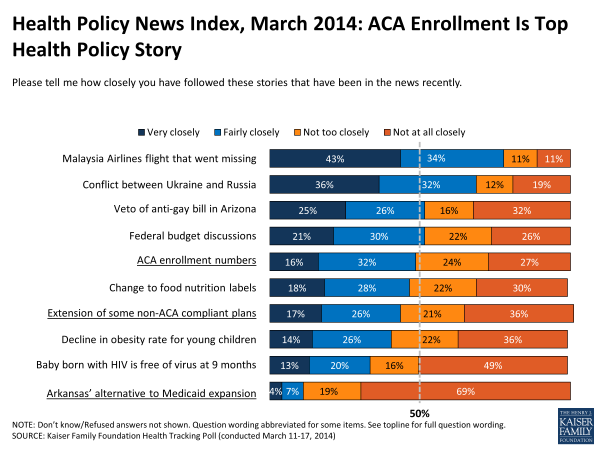 It may not be surprising that relatively few Americans report paying close attention to news about one particular state’s action on Medicaid expansion. However, survey findings also indicate that many Americans remain unaware of the status of Medicaid expansion in their own states as well. Among those living in states that have expanded their Medicaid programs under the ACA to cover more low-income adults1, about a third (34 percent) are aware that their state has opted for expansion, while 29 percent say their state has not expanded Medicaid and 36 percent say they don’t know. Among those living in states that have not expanded Medicaid, just over half (53 percent) are aware of their state’s decision, but still over one in ten (12 percent) believe that their state has expanded Medicaid, and about a third (34 percent) say they don’t know.