The Kaiser Health Policy News Index is designed to help journalists and policymakers understand which health policy-related news stories Americans are paying attention to, and what the public understands about health policy issues covered in the news. In the midst of the Affordable Care Act’s (ACA’s) second open enrollment period, health policy news fails to capture the attention of majority of the public. Not surprisingly, Americans’ attention is drawn to international news headlines, such as the attack on the French satirical newspaper, Charlie Hebdo, efforts to recover the AirAsia jetliner, and non-health, domestic news, such as the police conflict in New York and President Obama’s decision to restore diplomatic relations with Cuba.

Attention To The News

The first Kaiser Health Policy News Index of the new year finds only small shares of the American public paying attention to health policy news stories. Instead, the most closely followed stories this month were the conflict in New York City between police and the mayor following the fatal shooting of two police officers (67 percent), the Islamist terrorist attack on the French satirical newspaper, Charlie Hebdo, (64 percent), efforts to recover the AirAsia jetliner that crashed off the coast of Indonesia (59 percent), and President Obama’s decision to restore U.S. diplomatic relations with Cuba (54 percent). Although the lead up to the mid-term election and the results themselves garnered quite a bit of attention, the public appears to have lost interest in the new Congress, as 3 in 10 (30 percent) report tracking media coverage of the new Republican Congressional agenda for 2015. Further down on the public’s news radar are the following recent health policy stories: a bill passed by House Republicans to change the definition of full-time employees under the health care law’s employer requirement (27 percent), the health care law’s second open enrollment period (25 percent), the reversal of an FDA rule that banned gay and bisexual men from donating blood (22 percent), and controversy over an expensive new drug to treat Hepatitis C (15 percent). 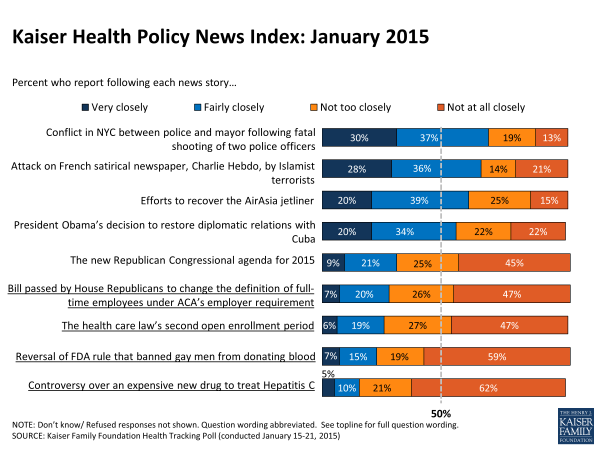 Although few report closely following health policy stories this month, a majority of Americans, both those who say they followed news about the ACA’s open enrollment period and those who do not, are aware of major provisions of the law. For example, over 6 in 10 know that the law creates health insurance exchanges where small businesses and individuals who don’t get coverage through their employers can shop for insurance and that the law provides financial help for low- and moderate-income Americans who don’t get insurance through their jobs to help them purchase coverage.

While a majority of public may report knowing that the health care law creates these exchanges, they are less confident in how much they know about them. Those who report closely following the news about the ACA’s open enrollment period are more likely to report that they know at least something about the marketplace (43 percent) than those who report not following this story as closely (26 percent). When it comes to details of the marketplaces, equally large shares of those following the news and those not following it correctly report that people who get insurance through the exchanges have a choice between private health plans (62 percent each).

Additionally, those who report closely following news of open enrollment are slightly more likely than those not following the news to be aware of the February 2015 deadline for individuals to enroll in coverage (22 percent vs. 13 percent), but still the vast majority of both groups are unsure of the deadline to sign up. 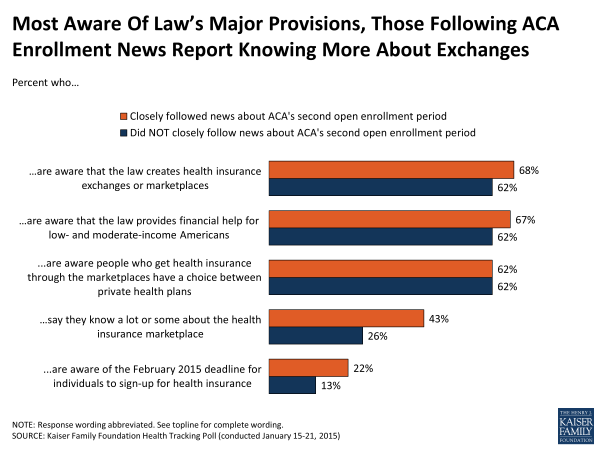 In the first week of the new Republican Congress, the House passed a bill that is now under consideration in the Senate that would redefine a full-time worker under the health care law’s employer requirement from one who works at least 30 hours a week to one who works 40 hours a week. The public is not particularly engaged in this story, as only about a quarter (27 percent) report following it in the news. After being told about the proposed change, four in ten say they oppose the definition change, while about a quarter (26 percent) say they support it and a third (33 percent) don’t know enough to say. In line with the American public as a whole, equal shares of those who followed the media coverage of this bill and those who did not oppose the change (41 percent and 40 percent, respectively). However, those who report following the story closely are more likely to support the change than those who say they did not closely follow the news coverage (36 percent compared to 22 percent), while those who did not follow the story are more likely to say that they do not know enough to say (37 percent compared to 21 percent, respectively). 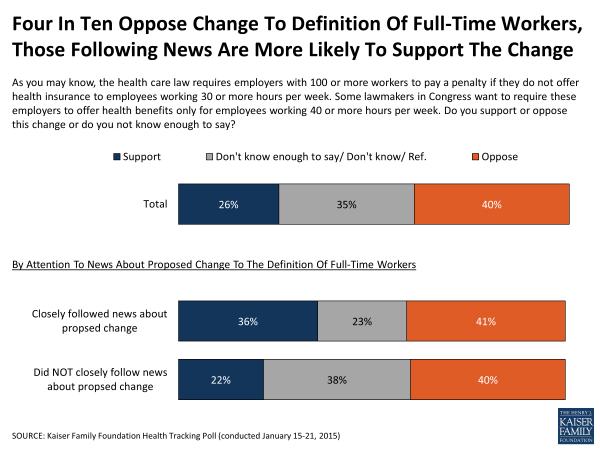