The Kaiser Health Policy News Index is a new feature of Kaiser’s public opinion research program launched in January 2014. It is designed to help journalists and policymakers understand which health policy-related news stories Americans are paying attention to, and what the public understands about health policy issues covered in the news.

Continuing news coverage of the rollout of the Affordable Care Act (ACA) captured the public’s attention this month, with over half (55 percent) saying they followed this story “very” or “fairly” closely, a level of attention that has been fairly steady since October. Other stories related to the health care law were followed by somewhat smaller shares of the public, including coverage of legal action involving the ACA’s birth control requirement (46 percent say they followed “very” or “fairly” closely, including roughly equal shares of women and men), discussions of the ACA in the 2014 elections (43 percent), and coverage of states’ decisions about whether to expand Medicaid (38 percent). A similar share reports closely following the release of a federal government report about U.S. health care spending (36 percent), while fewer followed the release of a study about Medicaid and emergency room visits in Oregon (16 percent). By comparison, about seven in ten (69 percent) say they closely followed news about the condition of the U.S economy, and four in ten (39 percent) say they followed coverage of the Supreme Court case involving same-sex marriage in Utah, slightly smaller than the share who report following the Supreme Court case about the health care law’s requirement that most health plans cover birth control. 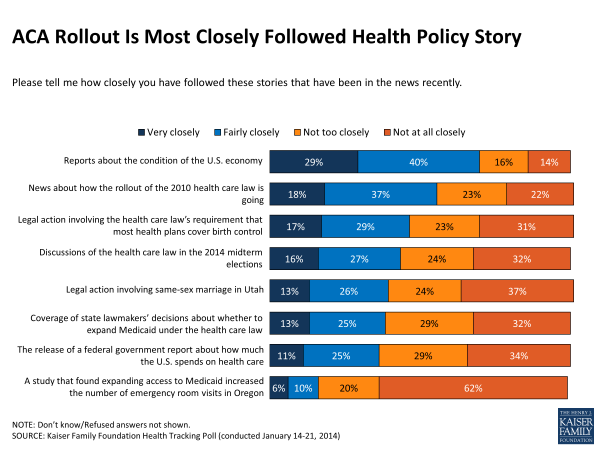 As mentioned above, over a third of the public (36 percent) say they closely followed news about the release of a federal government report on U.S. health care spending. The report, released on January 6, found that growth in U.S. health care spending remained low for the fourth consecutive year, increasing by 3.7 percent in 2012. Despite this, when asked their perceptions of the cost of health care in the nation, half of the public says that over the past few years, costs have been going up faster than usual (50 percent), and only 8 percent say costs have been going up slower than usual. Perhaps surprisingly, those who report closely following the release of the government report are not substantially more likely to be aware of the cost slowdown: only 11 percent of those who say they followed the story “very” or “fairly” closely believe that costs are going up slower than usual, and nearly half believe costs have been going up faster than usual (49 percent). 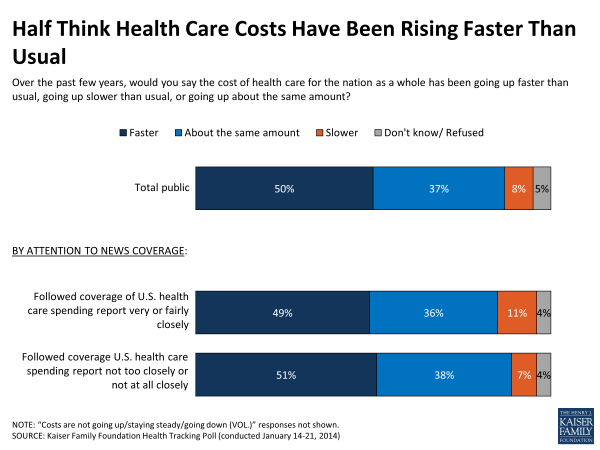