Will the Iran Debate Defuse Partisan Battles Over Obamacare?

This was published as a Wall Street Journal Think Tank column on July 23, 2015. 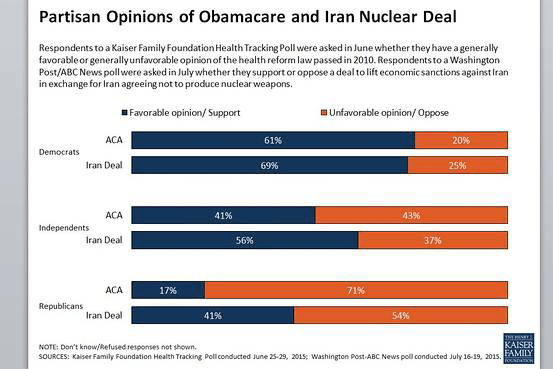 Debate about the Iran nuclear deal shows that issues besides the Affordable Care Act can suck up partisan oxygen, at least for a time. But the respite for the ACA is likely to be fairly short-lived.

As the chart above shows, initial Republican reaction to the Iran deal, though leaning negative, is not as negative as sentiments toward the health-care law. The Affordable Care Act escaped a political and policy crisis last month when the Supreme Court ruled for the government in King v. Burwell–and the ACA may catch a second break if conservative ire focuses on the Iran deal for the immediate future. But the health-care law is not likely to disappear for long as a political issue, and the politics of the ACA are not likely to change significantly until after the next election cycle. Consider:

In the general election, Republicans can be expected to use the ACA to appeal to their base to turn out voters. Not every Republican candidate will champion repeal, and repeal is highly unlikely even if the GOP wins control of Congress and the White House in 2016. (If that happens, however, a big debate about significant changes to the ACA in 2017 is virtually guaranteed.) Even with a Republican president and Congress, changes are likely to be more modest than sweeping, as campaign rhetoric confronts the real-life difficulties of taking away popular coverage expansions and insurance protections from millions of people. If a Democrat wins the presidency, smaller changes to the law are still possible, but a new Democratic president would have little interest in opening up a larger debate about the ACA with a Republican Congress.

If major issues continue to surface, the health-care law could catch another break. But the respite is still likely to be fairly short-lived.