How Obamacare Is Doing Better But Feeling Worse

This was published as a Wall Street Journal Think Tank column on August 13, 2014.

The Affordable Care Act is like a patient who is feeling worse when key clinical indicators say he is doing better.

Obamacare recovered from its Web site fiasco last October and went on to exceed enrollment projections in March. Despite predictions of “rate shock,” early indications are that premiums in the new insurance marketplaces are increasing modestly in most states that have made 2015 information public and more slowly than the non-group market has grown in the past. While critics said that the Affordable Care Act was having no impact on the uninsured, the share of the population that is uninsured is down significantly. Adding to the more upbeat news, health costs are rising at historically moderate rates, although the ACA has played only a supporting role in that so far. Still, opinion about the ACA has not moved significantly in any direction since 2010, when the law passed, and remains decidedly more negative than positive.

The best explanation can be seen in the chart below, which shows partisan views of the Affordable Care Act since 2010: Republicans have intensely disliked the health-care law from the start; Democrats have favored it; and independents are in the middle. Opinion has been locked in partisan stasis, occasionally moving slightly up and down, as when negative opinion ticked up in July in the Kaiser Family Foundation monthly tracking poll. 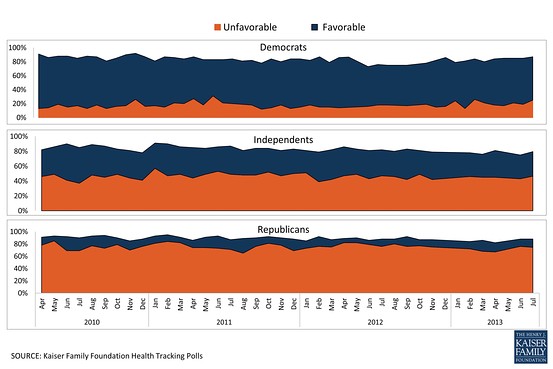 Kaiser Family Foundation polling on partisan views of the Affordable Care Act since 2010. Click here or above to enlarge the chart.

The sharp partisan divisions over the ACA explain the politics we see playing out as the midterms approach. Each side knows it can’t convince the other to change its views of the health-care law. So each plays to its base; especially Republicans, whose core voters feel most strongly about the law. There is no treasure trove of independents to go after with arguments on the ACA. Most independents lean either Democratic or Republican and pro- or anti-ACA; there are few true independents for politicians to woo with messages about the Affordable Care Act.

Opinions of the ACA are also stuck in neutral because the law is a proxy for people’s feelings about the president and the direction of the country, which are similarly divided along partisan lines. For many voters, it is almost impossible to tell where opinion on Obamacare ends and opinion on its namesake begins.

Kaiser polls at least every month on the ACA, and past results have convinced me that we could ask the public if the ACA will take us to Mars or solve the problem of climate change and the responses would split perfectly along partisan lines. The ACA’s role as a focal point for partisan and ideological differences in politics today explains how the ACA can be doing better but for many people feeling worse at the same time.