This was published as a Wall Street Journal Think Tank column on November 19, 2014. 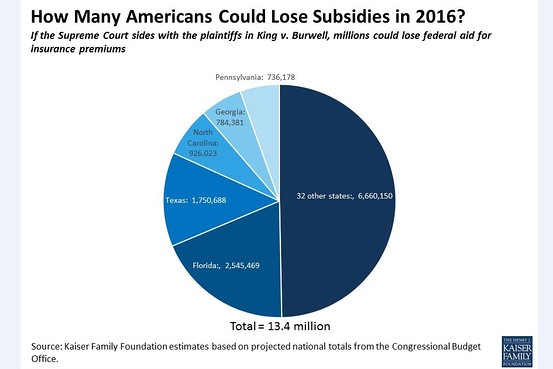 Kaiser Family Foundation calculations of how many Americans could lose subsidies in 2016 depending on the Supreme Court’s ruling in King v. Burwell.

The Supreme Court is expected to rule next year on King v. Burwell, the lawsuit in which the federal government’s authority to provide financial assistance to people who buy insurance in federally operated insurance exchanges is being challenged under a strict reading of the Affordable Care Act. Thirty-seven states have federal exchanges.

It will be another high-stakes moment for the ACA, which has been making steady progress since surviving a constitutional challenge in the Supreme Court, a presidential election, a government shutdown (in which it was a hostage), and an infamous Web-site meltdown. The enrollment season that opened Saturday has been mostly problem-free.

It’s always a mystery how much the justices consider extralegal factors in politically charged cases, including the ruling’s implications for the court’s legacy, public opinion and political repercussions; or the consequences for ordinary people.

In this case, whatever the merits of the legal arguments, the consequences are significant. The Kaiser Family Foundation has done calculations based on Congressional Budget Office projections for 2016 showing how many people would get financial assistance when the ACA is fully implemented. As the chart above shows, a decision for the plaintiffs would deny financial assistance for insurance premiums to approximately 13 million Americans in 2016. More than half are in a few big anti-ACA states that chose not to run their own exchanges: Florida, Texas, North Carolina, Georgia, and Pennsylvania.

But the consequences in other states are not small: In total, 100,000 to 500,000 people in 22 other states would become ineligible for financial assistance. Of the 37 states affected, several would probably scramble to establish minimal state-run exchanges to retain eligibility for tax credits for residents, particularly if the federal government makes back-end exchange technology available. But of the big anti-ACA five, only Pennsylvania, where a Democrat was just elected governor, would be likely to act to preserve federal aid for the 736,178 residents who would otherwise lose it.

Because most people eligible for tax credits have modest incomes, the vast majority would not be able to afford any coverage without financial help and the ranks of the uninsured would become much larger than they would otherwise be. And because the very sick would be most likely to remain in the insurance markets, rates would spike and insurers would leave the markets, possibly causing the marketplaces in states with federally run exchanges to collapse. If that happened, the resulting firestorm would likely precipitate a political crisis forcing a negotiation between Democrats and Republicans in Congress to address the problem and potentially opening up discussion of other elements of the ACA in the process. In such a polarized Congress, the results of that sort of negotiation are impossible to predict.