Facebook Twitter LinkedIn Email Print
This was published as a Wall Street Journal’s Think Tank column on May 1, 2016. 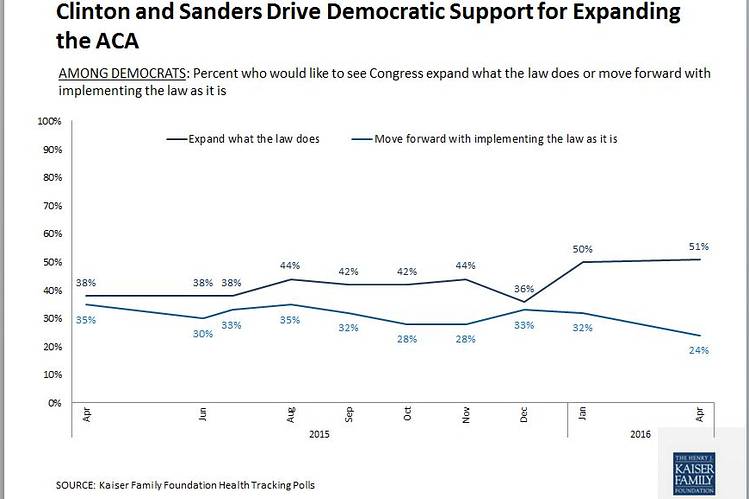 Among the most hotly debated of the issues Hillary Clinton and Bernie Sanders have taken on in the Democratic primary contest is how best to get to universal health insurance coverage. The former secretary of state favors incremental steps, and the senator calls for a single-payer system. That debate, and their focus on universal coverage as their goal, appears to have had a modest and perhaps surprising effect on attitudes toward the Affordable Care Act. The health-care law is an issue about which public attitudes seldom shift, yet the share of Democrats who want to expand the Affordable Care Act rose over the past year.

The debate moved the bar, but this does not mean health care became a driving issue in the primaries, though it was always in the mix of key topics for Democratic voters. In the recent Democratic primary in Pennsylvania, for example, exit polls show that one in five Democratic voters picked health care as an issue important to their vote. That’s about half as many as the voters who cited the economy and jobs as key to their choice.

At the same time interest grew in expanding the ACA, the share of Democrats who have an unfavorable opinion of the law also rose. It climbed six percentage points, to 25%, in the Kaiser Family Foundation’s April health tracking poll, up from 19% in March. Republican opposition toward the law remained stable over the same period.

Presidential elections have had an impact on public support for the ACA in the past. The numbers fell when Republicans blasted the law during the primary campaign in 2012. Now we are seeing support for expansion tick up as Democratic candidates debate how best to reach universal coverage. The takeaway seems to be: What the candidates talk about can sway opinion on policy, even if it doesn’t always affect how people vote.