Behind the Challenges to Universal Health Coverage 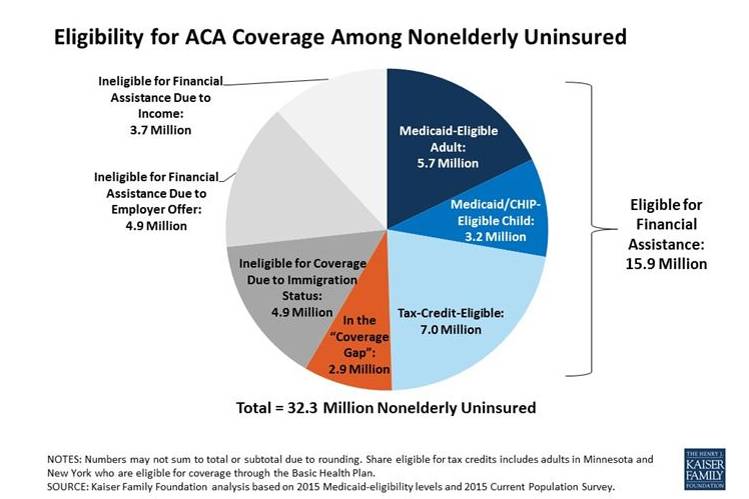 Both Democratic presidential candidates are calling for universal health coverage, though they disagree sharply on how to get there. Here’s the bottom line: There is no single program or policy likely to achieve full coverage of the complex collection of subgroups who make up the remaining uninsured in the U.S. except for a single-payer strategy. But Sen. Bernie Sanders has acknowledged that single-payer health care is not politically feasible in the foreseeable future and has said that it is unlikely without, among other things, campaign finance reform first.

More than 17 million people who previously did not have insurance have been covered so far by the Affordable Care Act. That’s enormous progress on one of health care’s biggest problems. But as the chart above shows, slightly more than 30 million people in the U.S. remained uninsured as of last year.

They are not a monolithic group. For example, about 4.9 million were undocumented residents; 8.9 million others were adults and children eligible for Medicaid but who, because of a complex array of factors, were not enrolled in their state’s Medicaid program. Seven million were eligible for tax credits to help them purchase coverage in the ACA marketplaces but had not signed up for coverage.

One group that has received a lot of attention is the uninsured who fall in the Medicaid “coverage gap” because their state has refused to expand the program under Obamacare. They represent 2.9 million of the remaining uninsured. Covering them would redress a glaring inequity and cut down the number of remaining uninsured. The entire problem, however, would still be far from solved.

About half of the eligible uninsured live in states that have expanded Medicaid under the ACA. The lack of interest some state leaders have in covering their uninsured residents makes getting to full coverage all the more difficult.

In the past, Democrats debated how fast to move and how far to go to cover the uninsured. Republicans have focused mainly on repealing or altering Obamacare; their health-care priorities do not feature universal coverage. By contrast, Hillary Clinton and Bernie Sanders have staked out strong positions on universal coverage. The makeup of the uninsured population and political realities suggest that the most likely path to universal coverage is a series of incremental steps–implemented in combination or sequentially–that build on the progress made by the ACA and chip away at the remaining uninsured in the U.S. group by group.