In the debate over the future of the Affordable Care Act (ACA), proposals have emerged that would repeal or weaken rules prohibiting health insurance discrimination based on health status, instead offering high-risk pools as a source of coverage for people who would be uninsurable due to pre-existing conditions.

Last year, HR 2653 was introduced by members of the House Republican Study Committee to repeal the ACA and replace it with other changes, including state high-risk pools.  This bill would authorize $50 million for seed grants to help states establish high-risk pools, and $2.5 billion annually for 10 years to help states fund high-risk pools.  More recent ACA replacement proposals would modify ACA market rules to guarantee access to non-group coverage for individuals who maintain continuous coverage, but not necessarily for other individuals; several proposals also would provide grants to states to help fund high-risk pools.

For more than 35 years, many states operated high-risk pool programs to offer non-group health coverage to uninsurable residents.  The federal government also operated a temporary high-risk pool program established under the ACA to provide coverage to people with pre-existing conditions in advance of when broader insurance market changes took effect in 2014.  This issue brief reviews the history of these programs to provide context for some of the potential benefits and challenges of a high-risk pool.

In the U.S. and other developed nations, population health care spending is highly concentrated:  in any given year, the healthiest 50% of the population accounts for less than 3% of total health care expenditures, while the sickest 10% account for nearly two-thirds of population health spending (Figure 1). Private health insurance pools risks so that premiums paid by most enrollees, who have low claims costs, help pay claims for the small share of enrollees with high costs.

Who is included in the high-cost and low-cost groups changes from year to year.  Most people are healthy most of the time, but illness and injury can and do onset unexpectedly for millions of people.  Some high-cost conditions, such as hemophilia or HIV, persist and require treatment for extended periods, even a lifetime.  Other high-cost conditions may improve or resolve, allowing patients to return to low annual health care spending.  In any given year, among the 50% least expensive people in a year, 73% will remain in that group for a second year; similarly, of people who are among the most expensive 10% of the population in one year, only 45% would still be in that group the following year.1 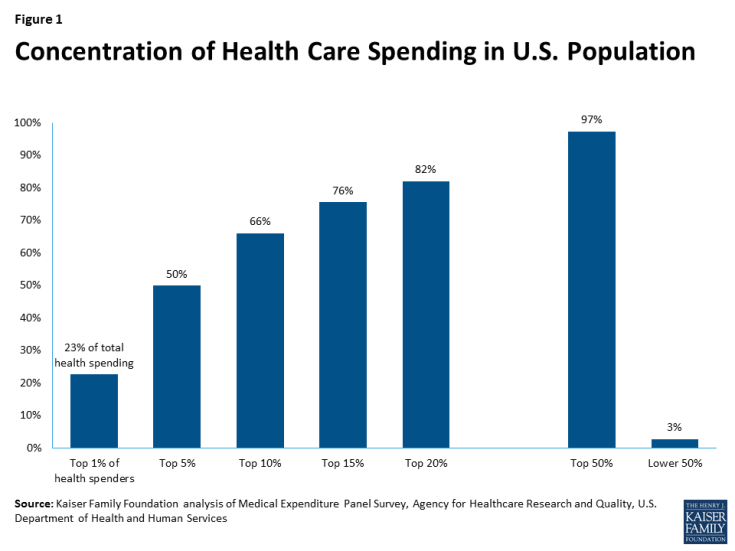 Prior to implementation of the ACA, insurers selling individual insurance commonly practiced medical underwriting, excluding people with pre-existing conditions or charging them higher premiums.  Medical underwriting effectively excludes a large proportion of total health care spending from the insurance pool.  This can permit less expensive policies for healthier individuals, but requires some other mechanism, such as high-risk pools, to help finance costs attributable to the sickest individuals if they are to be covered. Enrollee premiums can finance a portion of the cost of such programs, but by definition, significant additional funding will also be required because the cost of each person covered will be substantial.  For example, based on the distribution illustrated in Figure 1, per person costs in the top 10th percentile are more than 100 times, on average, that of people in the bottom 50th percentile.

Prior to implementation of the ACA, 35 states offered high-risk pools as a source of non-group health insurance for eligible residents (Figure 2). The first pools were implemented by Minnesota and Connecticut in 1976; North Carolina implemented a high-risk pool in 2009.  Pools offered eligibility to people in one or more of the following categories:

Medically eligible – Originally, high-risk pools were created to offer coverage to state residents with pre-existing conditions that made them uninsurable in the medically underwritten non-group health insurance market.  Alabama was the only state high-risk pool that did not provide coverage to medically eligible individuals. (The Florida pool, which did provide such coverage, closed to new enrollment in 1991.)2 Medically eligible individuals had to demonstrate their application for individual health insurance had been denied or restricted, or – in about two-thirds of state pools with presumptively eligible medical conditions lists – that they had been diagnosed with an eligible condition.3

HIPAA eligible – Following enactment of the Health Insurance Portability and Accountability Act of 1996 (HIPAA) – a federal law requiring non-group coverage to be available on a guaranteed issue basis with no pre-existing condition exclusions to certain individuals who had lost group health plan coverage – most state high-risk pools extended eligibility to HIPAA-eligible individuals.  One state, Alabama, opened its pool only to HIPAA-eligible individuals.4 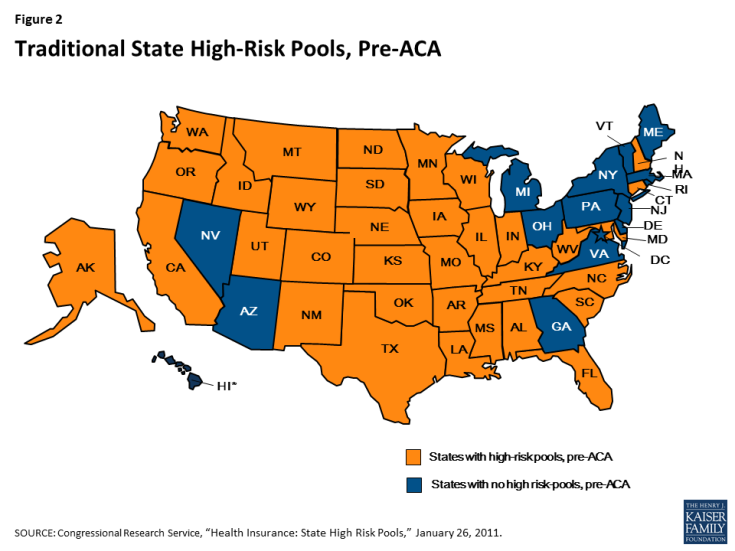 The potentially medically eligible population in high-risk pool states was likely much larger.  A Kaiser Family Foundation study found that 27% of adults under the age of 65 have health conditions that, prior to the ACA,  would have rendered them uninsurable if they had sought coverage in the non-group market.

Although no two traditional state-high risk pools were identical, nearly all adopted certain common features that tended to limit enrollment of eligible individuals.7  These included:

A small number of states capped or closed enrollment to limit program costs, though enrollment caps were not allowed for HIPAA-eligible individuals.  Limiting enrollment, directly or indirectly, was a key strategy to limit the cost of high-risk pools to states.  By design, all state high-risk pools experienced net losses – that is, expenses greater than premium revenue.  In 2011, net losses for 35 state high-risk pools combined were over $1.2 billion, or $5,510 per enrollee, on average.11     Most states financed net losses through an assessment on private non-group health insurance premiums; however, nearly all state high-risk pool assessments were offset by tax credits so that, in effect, general state revenue funding applied.  A few states used other revenue sources – tobacco taxes and hospital assessments – to fund high-risk pool losses.  In addition, in 2003-2010 federal grants were available intermittently, subject to appropriations, to help fund qualified state-high risk pools that met certain criteria.  For the first two fiscal years (2003-2004) $80 million per year was appropriated; $75 million in grants was next awarded in 2006, followed by $49 million in 2008, $73.5 million in 2009, and $55 million in each of 2010 and 2011.  In some years, a portion of federal grant funds was reserved for states that adopted supplemental consumer benefits such as low-income premium subsidies.  Federal grants comprised between 2% and 12% of program expenses in states that received them.12

The ACA established a temporary, national high-risk pool program, implemented in 2010, to offer coverage for uninsured individuals with pre-existing conditions until 2014, when private non-group policies would be available under new market rules prohibiting insurance discrimination based on health status.  The law required PCIP enrollees to pay premiums and appropriated $5 billion to fund expected net losses during the program’s duration. Twenty-seven states opted to administer PCIP for their residents; the federal government operated PCIP for 23 states and D.C.

Program features under PCIP varied from state high-risk pools in several significant respects.  Under the law, PCIP premiums were set at 100% of the standard risk rate for non-group health insurance in each state, meaning rates varied by age but were otherwise equivalent to what a typical person without a pre-existing condition would pay. Low income premium subsidies were not offered.  PCIP did not impose annual or lifetime dollar limits on covered benefits.   Annual out-of-pocket-cost sharing was capped at the level set for tax-favored high-deductible health plans ($6,050 in 2012) and a minimum actuarial value of 65% was established for program coverage (meaning patients were expected to pay, on average, 35% of their health expenses).  In 42 states, the lowest deductible option offered in 2012 was at least $1,000.13

PCIP did not impose pre-existing condition exclusions.  However, to prevent “crowd out” from existing state pools and other private insurance, PCIP eligibility was limited to individuals who had been uninsured for at least 6 months immediately prior to enrolling.

PCIP was operational in all 50 states by the fall of 2010.  By late 2012, just over 100,000 individuals were enrolled and program expenses had consumed nearly half of the $5 billion appropriation.  For the final 12-month period for which PCIP expense data were reported, net losses for the program were over $2 billion.  (Table 2)

In 2012, average per enrollee claims costs for PCIP were $32,108, or more than 2.5 times higher than average per enrollee claims costs ($12,471) under traditional state high-risk pools, all of which continued to operate that year.14  Compared to traditional state high-risk pool enrollees, PCIP enrollees tended to have more immediate and intensive health care needs, including higher hospital admissions, likely due to the six-month prior uninsurance requirement and lack of pre-existing condition exclusions.15  By contrast, many traditional state pool enrollees were HIPAA-eligible, meaning they had to have been continuously covered and were less likely to have put off needed treatment prior to joining the pool.  Pre-existing condition exclusions would have limited traditional pool coverage of initial treatment costs of (or enrollment by) other non-HIPAA eligible individuals.16

In the face of growing expenses, PCIP adopted a series of changes to limit program costs.  In 2012 federally-administered programs switched to a less expensive provider network and negotiated additional discounts with targeted hospitals that treated large numbers of PCIP enrollees.  State-run programs were required to achieve similar cost savings or transition to federal administration; 17 state programs transitioned in mid-2013.  The federal PCIP program also consolidated plan options for 2013, eliminating those offering the lowest patient cost sharing.  Even with these changes, program expenses were still projected to exceed appropriated funds before the end of 2013.  In March 2013, new PCIP enrollment was suspended to ensure sufficient funds to pay claims for people already enrolled.18  PCIP enrollment peaked at nearly 115,000 in March 2013, then declined below 90,000 six months later.

Nearly four decades of experience with high-risk pools suggests they have the potential to provide health coverage to a substantial number of people with pre-existing conditions. State high-risk pools that existed prior to passage of the ACA covered over 200,000 people at their peak, and the temporary PCIP pool created as part of the ACA covered over 100,000 individuals.

Even with these limitations, the government subsidies required to cover losses in these high-risk pools were substantial – over $1 billion per year in the state pools and about $2 billion in the final year of PCIP.  A high-risk pool with minimal barriers to enrollment could cost substantially more.