Pulling It Together: Health IN the Economy

I am writing this Pulling It Together column about this one chart and its potential interpretations and implications.

This chart from our most recent tracking poll shows the economy rising as a political issue and health care falling, with Iraq in the middle. Findings from other polling groups will show the same thing for as long as the economy falters and the public feels the pinch. National candidates for office, elected officials, the national media — all those who drive the national agenda — will look at these polls and conclude that health is a fading issue. Exit polls after the 2008 election are likely to show a similar result and to be interpreted in a similar way. If that’s the end of the story, the result could be a smaller political appetite to address health care issues in Washington.

But when Molly Brodie and our polling team probed further to find out why people were naming the economy their top concern we learned that there is more to the story. In the early nineties James Carville famously scribbled on a blackboard: “it’s the economy, stupid,”…and then added, “don’t forget health care.” Now, we learn from our poll, it’s the economy, and that INCLUDES health care.

When we asked the public about the types of problems they were experiencing as a result of the economic downturn, serious problems paying for health care and health insurance ranked in a statistical tie for second along with job issues, behind paying for gas which was named by far and away the largest share of the public. More people reported serious problems paying for health than paying for food, their rent or mortgage, credit card debt, or losing money in the stock market; all pocketbook issues you would expect people to care a lot about. 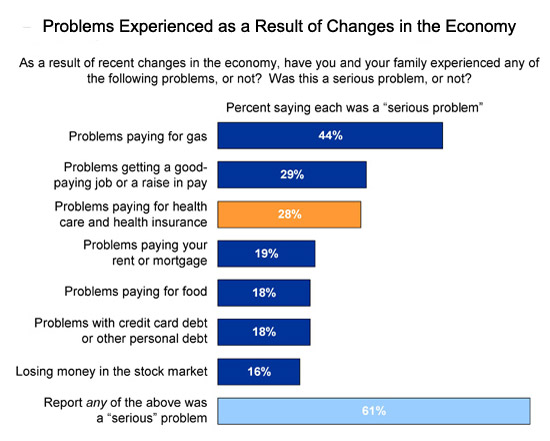 Problems paying for health care extended well into the ranks of the middle class (view chart). Moreover, significant percentages of the public told us that the problems they were having were rippling through their family budgets, affecting their ability to pay other bills, using up their savings, or making it hard for them to pay for food or other necessities (view chart). A separate Foundation analysis by Gary Claxton and Paul Jacobs for our Snapshots: Health Care Costs series shows how as premiums have risen wages have not kept pace, so it’s not surprising that people are feeling the pinch. And a new study by our Kaiser Commission on Medicaid and the Uninsured explains why more people may be feeling squeezed: it shows that a 1% increase in the unemployment rate results in an increase in the uninsured of 1.1 million, among other effects.

The costs of health care and health insurance are also important in political terms. Our polls show that these costs, more than expanding coverage, are the health issues independent voters care about most, and they are the voters the candidates will be courting most in the upcoming election.

When you see the polls over the next two years that show the economy number one, Iraq number two, and health number three and potentially even falling a little, remember that health is not necessarily a fading issue, because it should be seen as part of the public’s broader and rising economic concerns. As I noted in previous columns, there are many ways in which momentum for action on health may, and probably will, fall off track, leading, most likely, to incremental rather than comprehensive change. But the rise of economic worries and problems, rather than becoming a reason to defer action on health could present an opportunity to reframe the issue as the public sees it: as a single overarching problem of the affordability of care, and not as we health policy people think about it, as separate challenges of controlling costs and expanding coverage. And with paying for health care ranking up there with job issues and gas prices for the public as daily economic problems, elected officials might want to think about addressing the public’s health care concerns differently too; not just through the lens of “health reform,” but as economic policy as well.