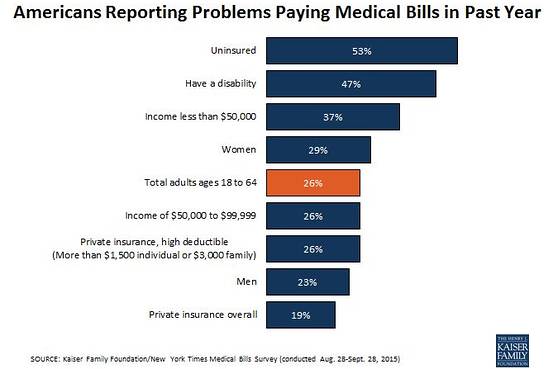 The adequacy of health insurance coverage–sometimes called under-insurance–pops up periodically, but the issue has taken a back seat to covering the uninsured and controlling health-care costs. Yet the number of Americans who have problems paying their medical bills in a given year runs into the tens of millions, a survey conducted by the Kaiser Family Foundation and the New York Times found. These are not only people who are uninsured, have low incomes, or are very sick. For many, their uncovered medical expenses affect their ability to meet other basic needs–such as paying for housing, food, or heat–or make it tough for them to pay other bills.

As the chart above shows, large shares of the uninsured (53%), the disabled (47%), and people who earn less than $50,000 a year (37%) experienced problems paying medical bills in the last year, as have 26% of those earning $50,000 to $100,000. Significant shares of people who have private insurance with high-deductible plans (26%) and those with private insurance overall (19%) report problems with medical bills in the last 12 months.

Among those who experienced problems paying medical bills, 66% say it was for one-time or short-term events–making it difficult to plan ahead for the expense–with the biggest bills going for emergency-room visits and hospital care. Forty-two percent of those with medical-expense problems had bills of $2,500 to $10,000; a separate 13% had bills of $10,000 or more. Charges from out-of-network providers contributed to problems with medical bills about a third of the time, and the majority of people who struggled with out-of-network bills said they did not know the health-care provider was not in their plan’s network at the time they received care.

The impact of medical bills can be felt across family budgets. Three in 10 people (35%) said they could not pay for other basic needs such as housing, food, or heat because of their medical bills. Sixty-one percent said the expenses made it harder to pay their other bills. People with medical debt also put off health care for fear of running up more bills. For example, 43% say they did not fill a prescription in the last 12 months because of the cost, about three times the share (14%) of those who did not fill a prescription but did not have bill problems. Slightly less than half of people with problems paying medical bills (47%) also have trouble paying other bills, but some have no problems besides their medical bills (31%) or have had other bill problems only because they needed to pay their medical bills (19%).

The Affordable Care Act has insured millions of previously uncovered Americans, improving their financial security and access to health care while establishing new rules for coverage that guarantee many people far better financial protection and more comprehensive benefits. Problems with medical bills would be significantly worse without the ACA. But adequacy of health insurance will become more pressing with so many Americans experiencing problems paying medical bills each year and as deductibles and other forms of cost sharing continue to increase.