As of February 2021, 12 states have not adopted the Affordable Care Act (ACA) provision to expand Medicaid to adults with incomes through 138% of poverty. Millions of people in these states remain without an affordable coverage option. Currently, the federal government covers 90% of the cost of Medicaid coverage for adults covered through the ACA expansion, a higher share than it does for other Medicaid enrollees. The House Energy and Commerce Committee reconciliation proposal as part of the COVID relief package aims to encourage non-expansion states to take up the expansion by providing an additional temporary fiscal incentive for states to newly implement the ACA Medicaid expansion. This brief provides illustrative estimates of the net fiscal benefit to states from these incentives relative to state costs under the expansion. We review the methods underlying these estimates in the Methods section at the end of the brief.

How Does the Fiscal Incentive Work?

Under the proposal, states would receive the 90% ACA match for the expansion population. Under the ACA, states currently receive a 90% federal matching rate (FMAP) for adults covered through the ACA expansion (this amount was 100% in 2014 and phased down to 90% over time). In states that have not expanded to date, adults who could be covered under expansion include about 4 million uninsured people (2.2 million with incomes under poverty in the “coverage gap” and 1.8 million currently eligible for marketplace coverage because their incomes are between 100% and 138% of poverty level). In addition, individuals with incomes 100-138% of the federal poverty level (FPL) who are currently enrolled in marketplace coverage would become eligible for Medicaid.

Under the proposal, states that do not have expansion in place when the bill is enacted would be eligible for a 5 percentage point increase in the state’s regular, or traditional, match rate (FMAP) for two years if they implement the expansion. The traditional FMAP applies to most services for non-expansion groups, including children, non-expansion adults, seniors, and people with disabilities. Even in states that have already adopted the expansion, the traditional Medicaid program is much larger – representing 79% of Medicaid spending overall in these states – and per enrollee costs are relatively higher than the expansion group. So, under this new incentive, states could draw down additional funds for a large share of their Medicaid population and spending if they newly expand. In addition to the 12 states that have not adopted the expansion, the increase in the match rate could also apply to Missouri and Oklahoma if the bill is enacted before they implement the expansion (these states are expected to implement in July 2021). Further, if states newly adopt the expansion in the near term, the new 5 percentage point increase would be in addition to the current 6.2 percentage point increase in the match rate provided under the Families First Coronavirus Response Act (FFCRA) that is tied to the Public Health Emergency (PHE). Based on a January 2021 letter from the Biden Administration to Governors, the 6.2 percentage point increase in the match will be in place at least through March 2022, halfway through federal FY 2023. While the enhanced match would be in place for two years after a state implements the Medicaid expansion, states can take advantage of this new option at any time.

What Is the Estimated Effect on State Spending? 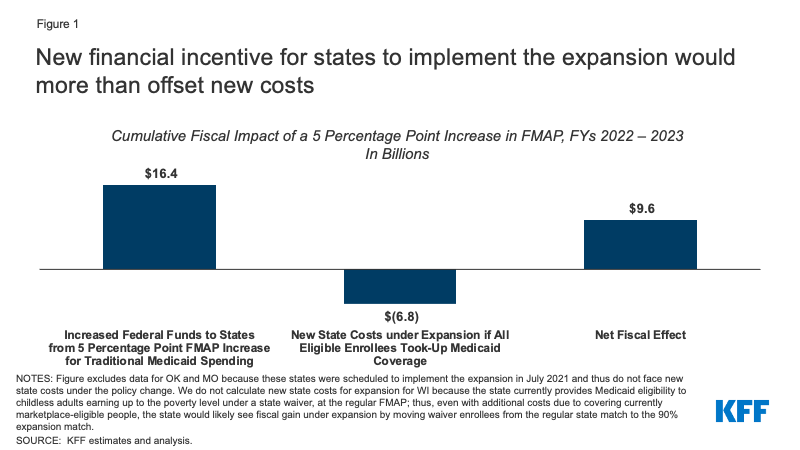 These are illustrative estimates and subject to uncertainty. For example, the estimate of increased federal support from the enhanced match rate could be low if traditional Medicaid enrollment grows faster than our estimates assume, which may be possible given the pandemic and economic effects. In addition, the estimates of costs for new coverage could be high as we do not model take up but rather estimate costs for all eligible people; alternatively, the estimate for expansion could be low as it is based on national survey data that typically undercounts lower income people. Even with some uncertainty in the estimates, the magnitude clearly shows that the federal support would significantly outweigh the new costs of expansion while the temporary expansion incentive is in place. These estimates are not comparable to estimates from the Congressional Budget Office (CBO) that are capturing changes in federal spending over the next 10 years and incorporating behavioral responses that assume not all states would adopt the new option. The CBO estimates account for increased federal spending and reduced costs for federal subsidies in the Marketplace for states that adopt the expansion. CBO assumes that the option could increase federal spending by a net of $15.5 billion over the 2021-2030 period.

Medicaid expansion in the remaining 12 non-expansion states has the potential to reach millions of people. A comprehensive literature review of Medicaid expansion studies shows that expansion helps to expand coverage and reduce the uninsured, improve access to and utilization of care, reduce uncompensated care costs, improve affordability of care and reduce racial and ethnic disparities in coverage. The proposed provisions would also provide substantial fiscal incentives for states to expand, which could be attractive given recent state revenue declines. However, given that the expansion incentive would be temporary, its effect may be limited.